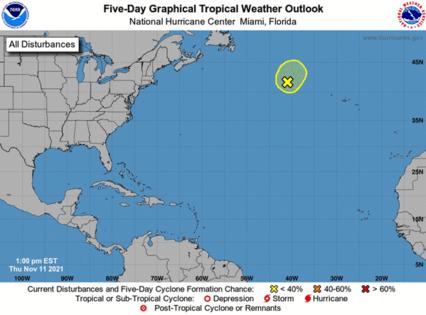 If the system becomes Adria, it would be the first to get a name this year from a supplemental list. That’s because the regular list has run its course as mid-November approaches.

The extra list had used the Greek alphabet for names, but officials said it was confusing for people during last year’s busy hurricane season and changed it for 2021. So now we get more people names.

As of the National Hurricane Center’s advisory at 1 a.m. Thursday, the nontropical area of low pressure carried rain and storm-force winds about 900 miles east-northeast of Bermuda. The system is moving northeast, far away from the United States.

Forecasters say the system could turn into a “short-lived” subtropical storm before it reaches cooler waters Thursday evening and is later absorbed by a larger nontropical low by the weekend.

It has a less than 40% chance of formation in the next two to five days, according to the hurricane center.