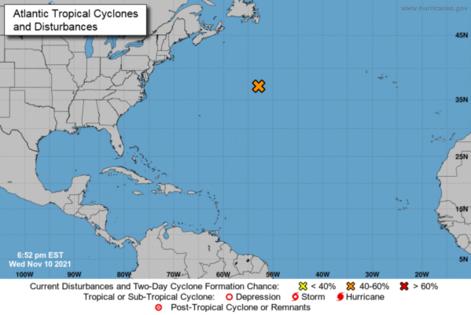 The system returned to the NHC’s attention with odds of development while it’s several hundred miles east-northeast of Bermuda and producing a large area of showers, the NHC said in its 2 p.m. EST update.

The storm-force nontropical area of low pressure still has not developed sufficient characteristics to be classified as a subtropical, but there will be a brief pocket of opportunity Wednesday night for the system to become subtropical before reaching cooler waters Friday morning.

“By this weekend, the system is expected to be absorbed by a larger nontropical low,” the NHC said.

If the system forms into a tropical storm, it will pull a name from an auxiliary alphabet set up by the World Meteorological Organization, starting with the name Adria. Only two other seasons have had to venture into a supplemental alphabet: 2005 and 2020.

Earlier this year, the World Meteorological Organization retired its use of the Greek alphabet to designate storms due to confusion over similar sounding letter: Eta, Theta and Iota.

The end of hurricane season is Nov. 30.