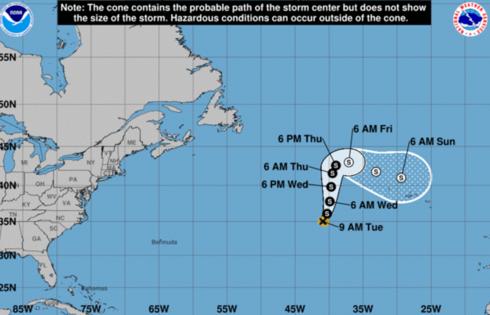 ORLANDO, Fla. — Wanda became a tropical storm overnight and gained a bit more steam as it continued heading north Tuesday morning, the National Hurricane Center said. Meanwhile another system in the Caribbean lingers off the coast of Central America.

First, Wanda gained maximum sustained winds of 50 mph and its tropical-storm-force winds now reach up to 60 miles from its core, the NHC said. The storm is 800 miles west of the Azores and moving at 8 mph.

Wanda formed late Saturday as a subtropical storm, the 21st named storm and exhausted all of the letters in the World Meteorological Organization’s Atlantic hurricane season alphabet. There have been only two other storm seasons to have more than 21 named storms: 2005 and 2020.

It is no threat to land.

Models show the system could strengthen to 60 mph over the next two days but should begin degenerating by the weekend.

The hurricane center is also tracking another system in the Atlantic with low odds of development.

A low pressure system the NHC identified Monday afternoon over the southwestern Caribbean is north of western Panama. Models show the system heading west over Central America later today. While not a tropical storm, the system still might create life-threatening mudslides across southern Nicaragua, Costa Rica and Panama.

The system is expected to move over the eastern section of the Pacific on Wednesday. It is not expected to develop due to interaction with the Central American terrain.

If this system develops into a tropical storm, the system will venture into a supplemental alphabet, with the first name to be Adria.

If that happens, it will be only the third time meteorologists have had to venture into a secondary naming system, first in 2005 and then in 2020 during that year’s record-breaking run that saw 30 named storms.

In both previous years, the hurricanes and tropical storms that came later in the season took on Greek alphabet names like Alpha, Beta and Gamma. Meteorologists made the switch to a non-Greek alphabet to avoid confusion among similar sounding names such as Eta and Theta.

The hurricane season lasts through Nov. 30.