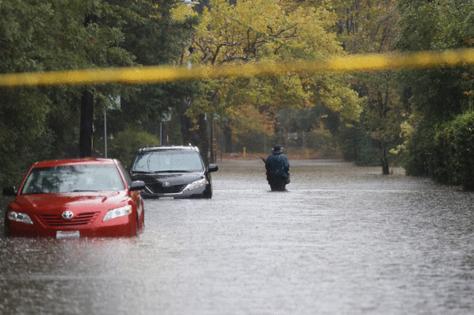 LOS ANGELES — The powerful storm that walloped Northern California over the weekend moved into Southern California on Monday, bringing with it the potential for localized flooding, strong winds and debris flows across the region.

The atmospheric river storm could dump up to an inch and a half of rain on downtown L.A.

The system is “unusual for this time of year in terms of its strength,” said David Sweet, a meteorologist with the National Weather Service in Oxnard. “It’s a very, very powerful storm.”

The brunt of the storm was expected to enter Orange County and the Inland Empire region sometime in the midafternoon, before continuing its march southward toward San Diego, according to the National Weather Service.

“The evening commute may get a bit dicey, so please plan accordingly!” the agency’s San Diego office tweeted.

Cities closer to the coast could see anywhere from two-tenths to half an inch of rain through the evening, forecasters said. Higher parts of the San Gabriel and San Bernardino mountains could record rainfall totals of an inch or more.

The L.A. County advisory was the latest in a series of watches and warnings issued as the storm slogged its way southward.

A morning flood advisory was issued for southern and eastern San Luis Obispo County. Over the last 24 hours, some areas of the county — including Cal Poly San Luis Obispo and Rocky Butte — have recorded more than 5 inches of precipitation.