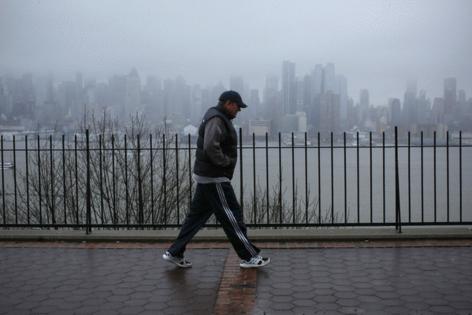 PHILADELPHIA — With a high of 77 degrees, Philadelphia set a record Monday, and temperatures for the month are running 6 degrees above normal. And while the leaves are taking their grand old time changing, the region is about to get a reminder, maybe two, that we are getting more deeply into autumn.

The first nor’easter of the season is forecast to affect the region into Wednesday, with heavy rains, possibly severe storms, road flooding, and strong winds from the northeast — why these coastal storms are called nor’easters.

The storm is likely to be a bigger deal at the Shore, where gale warnings are in effect for gusts past 45 mph, with tidal flooding and beach erosion likely.

Soaking rains are expected throughout the region, with amounts of 2 to 4 inches. In addition to the Shore, flash-flood watches are in effect for Philly nearby counties.

And after a brief dry run with something resembling seasonable temperatures, a sequel is possible at the end of the workweek with more winds and heavy rains. On average, the East Coast can expect one nor’easter in October, according to data from the Northeast Regional Climate Center.

This time of year temperature contrasts sharpen and storms tend to be more organized, as opposed to the frequently chaotic nature of shower activity in the warm seasons. But having two nor’easters in October would be unusual.

The Storm Prediction Center had the entire region under a “marginal risk” for severe storms, those with winds approaching 60 mph, Monday night.

“This has the potential to be high impact for our region,” the weather service said. However, the outcomes remained uncertain, said Valerie Meola, a meteorologist at the National Weather Service in Mount Holly.

A storm developing off the Southeast coast was forecast to interact with mid- and upper-level systems migrating from the Midwest.

After a balmy Monday in which the high of 77 bested the previous record, 75, set in 2010, it’s a near certainty that Tuesday will be noticeably less pleasant. Just how unpleasant will depend on how potent the coastal low becomes and how far offshore it intensifies.

“It’s going to be an interesting setup,” Meola said.