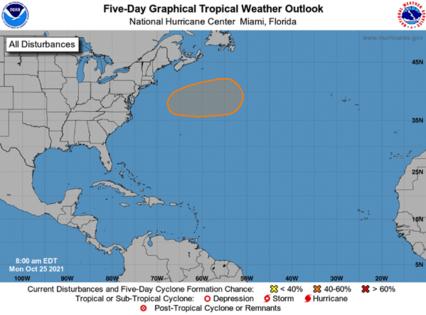 The National Hurricane Center is monitoring the U.S. East Coast, where it expects a non-tropical low-pressure system to emerge in the next day or so. The frontal low should move north-northeast through the middle of the week, bringing rain and wind to portions of the mid-Atlantic.

Meteorologists forecast a 40% chance of the system becoming a tropical depression by the end of the week.

If the storm develops maximum sustained winds of 40 mph or more, it will become a tropical storm, receiving the name Wanda — it is also the last name on the World Meteorological Organization’s regular-season list. If there is another named storm after Wanda, the WMO will activate its auxiliary list, starting with Adria. The WMO retired from using Greek letters earlier this year due to confusion caused by similar-sounding letters: Zeta, Eta, and Iota.

At this same point last year, meteorologists were keeping track of 27 named storms with Epsilon and Zeta spinning in the Atlantic and Gulf of Mexico. The latter struck Louisiana on Oct. 28 as a Category 3 major hurricane, causing $1.25 billion in damages, according to the National Oceanic and Atmospheric Administration.