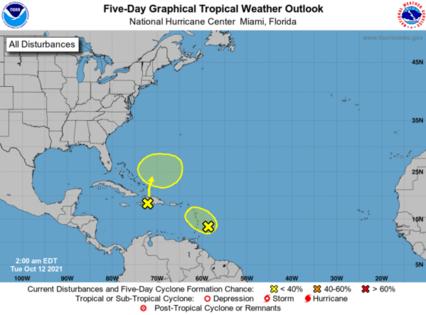 A tropical wave located about 150 miles east-southeast of the Windward Islands is less defined than Monday, according to the 2 a.m. update. The NHC said the wave has a 10% chance of forming in the next two to five days. The system is moving west-northwestward at about 15 mph, and strong upper-level winds are keeping its odds of developing down.

The system is pushing heavy rainfall and gusty winds across portions of the central and northern Lesser Antilles on Tuesday and across the Virgin Islands and the Leeward Islands over the next couple of days.

Next, a tropical wave located over the eastern Caribbean Sea is producing a large area of disorganized cloudiness and showers over portions of the Leeward Islands, the Virgin Islands, and Puerto Rico. Upper-level winds are also preventing strong chances of development for this system. The wave is expected to become a broad area of low pressure near the southeast Bahamas and drift eastward through the end of the week. The Lesser Antilles are forecast to receive even more rain from this system during the next couple of days, as well as Puerto Rico and Hispaniola.

The NHC gives a 20% chance of forming over the five days.

If any of the two storms form a system with more than 39 mph sustained winds, it would be named Tropical Storm Wanda, the last name in the 2021 Atlantic hurricane season alphabet.