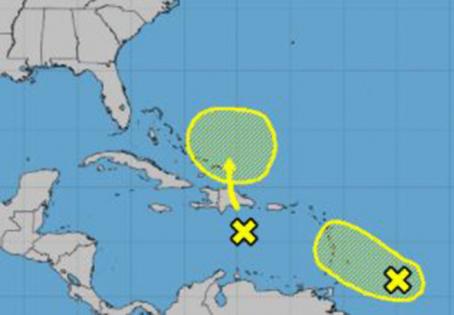 A tropical wave located east-southeast of the far eastern Caribbean is forecast to move in the general direction of the Bahamas this week. It is expected to bring heavy rain and winds to areas such as Puerto Rico, Haiti and the Dominican Republic. By midweek, it should reach the southeastern Bahamas. With wind shear not as strong at that point, chances will be more favorable for its development.

A second tropical wave emerged Sunday over the eastern Caribbean, just a few hundred miles west of the first. It is forecast to produce heavy rain in parts of the Virgin Islands and areas nearby as it travels west-northwest at 15 mph. Forecasters say strong upper level winds could hinder its chances of development by midweek.

As of Monday each had low odds of developing within the next five days, according to the National Hurricane Center.

If one more storm or hurricane were to form this season, which runs through Nov. 30, 2021 would rank third in the record books for the most named storms to develop in one hurricane season. Wanda is the only name remaining on this year’s list of official storm names.

Only twice before — in 2005 and 2020 — was the list of storm names entirely used in a hurricane season since 1966, according to AccuWeather.

Forecasters had been also watching a large area of low pressure near the Carolinas since last week. It is no longer forecast to develop, but will bring storms to the Outer Banks in North Carolina on Monday, according to the hurricane center.