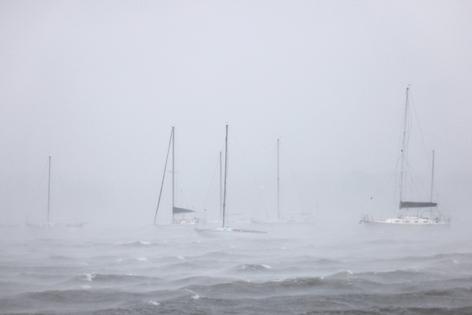 A vigorous tropical wave is a few hundred miles east-southeast of the Windward Islands, according to the National Hurricane Center’s 8 p.m. advisory. It’s causing an area of cloudiness and thunderstorms.

The disturbance could see some additional development over the next few days as it moves west-northwestward at about 15 mph, forecasters say. It is expected to approach central and northern Lesser Antilles by late Monday and early Tuesday.

The system will produce heavy rainfall and gusty winds on Tuesday across those areas of the Lesser Antilles, and across the Virgin Islands on Wednesday.

Over by North Carolina, a large, non-tropical low pressure area is causing showers and thunderstorms about 80 miles south of Cape Hatteras.

Forecasters note it will still produce a small area of gale-force winds just offshore of the eastern North Carolina coast through the rest of Sunday. Dry air and strong winds are expected to prevent any further development of the system while it moves slowly northward or north-northeastward through Monday.

It has a 10% chance of forming through the next five days.

Another tropical wave located over the eastern Caribbean Sea is producing a large area of disorganized cloudiness and showers over portions of the Leeward Islands, the Virgin Islands and Puerto Rico, forecasters added.

Winds are expected to limit any development over the next day or so, but environmental conditions could become a little more conducive for some gradual development of the system when it is near the southeastern Bahamas sometime next week.

Heavy rainfall will be possible over portions of the Virgin Islands, Puerto Rico and Hispaniola during the next couple of days.

Should one of the disturbances develop, it would be named Wanda. If the other forms, a supplemental name list would be used, beginning with Adria.