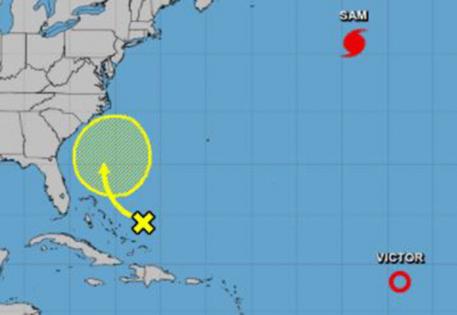 FORT LAUDERDALE, Fla. — Forecasters are monitoring a system near the southeastern Bahamas for potential development, which could take place anywhere from the eastern Caribbean islands to offshore of Florida’s east coast up to the Carolinas.

It is expected to move west-northwest through the weekend in the general direction of Florida and the U.S. East Coast. Experts at the National Hurricane Center said there’s a chance the system could slowly develop this week, if it can overcome storm-shredding wind shear present in the area.

Its odds of developing within the next five days dropped lower early Monday, down to 10%, according to the hurricane center.

“Strong forecast wind shear should prevent a tropical system from forming just east of the zone from Florida to the Carolinas this week,” AccuWeather Chief On-Air Meteorologist Bernie Rayno said.

Wind shear is expected to steeply decline starting midweek, which would make the Caribbean much more conducive for storm development going forward, according to AccuWeather.

October is one of the most active months for tropical activity in the Atlantic. If one more named storm forms this season — Wanda — experts say 2021 will rank third in the record books for the number of named storms generated in one hurricane season.

Wanda is the last remaining storm name for 2021, in a season that runs through Nov. 30. Any storms to form after Wanda would be named using an overflow list, which includes Adria, Braylen, Caridad, Deshawn, Emery, Foster, Gemma and Heath.

Hurricane Sam, still a sprawling storm, is expected to speed up then slow down near Iceland by midweek. Sam is forecast to weaken as it moves over the open Atlantic. It could be a post-tropical depression by Tuesday, the hurricane center said.

At 11 a.m. EDT Monday, Sam was at Category 2 hurricane strength with top winds of 100 mph.

Sam remained a major hurricane, of Category 3 and above, for nearly eight days, which tied it with 1996′s Hurricane Edouard for the fourth longest-lasting major hurricane to ever churn in the Atlantic since 1966, according to Colorado State University hurricane expert Phil Klotzbach.

Tropical Storm Victor is expected to continue to gain strength over the warm Atlantic waters and become a Category 1 hurricane Friday, the National Hurricane Center said.