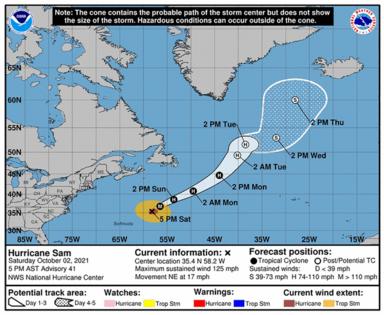 “An increasing long period swell moving into the surf zone will produce a high risk of life-threatening rip currents along the Atlantic beaches of east central Florida this weekend. Entering the surf is not advised,” the statement reads.

Going into the weekend, Volusia County Beach Safety Ocean Rescue was flying the red and purple flags for both dangerous surf conditions and dangerous wildlife such as jellyfish. They performed three rescued on Friday, according to spokesperson Capt. Tamra Malphurs.

“Building surf from Sam will create hazardous rip current conditions throughout the weekend. Please swim in front of a lifeguard,” she said.

The center of the seventh hurricane of the year is more than 1,200 miles away from Florida and no longer a threat to land as it’s moving away from Bermuda, located about 435 miles east-northeast of Bermuda and headed northeast at 17 mph with 135 mph sustained winds, according to the National Hurricane Center’s 5 p.m. advisory.

It quickly grew into a hurricane as of Sept. 24, and into major hurricane one day later, having remained a Category 3 system for eight days. It reached 150 mph winds, a strong Category 4 system, twice in the last week, equaling the strength attained by Hurricane Ida earlier this season to tie it for the strongest hurricane of 2021.

The 20th named system of the busy 2021 season was located about 950 miles west of the Cabo Verde Islands moving northwest at 14 mph with sustained winds of 35 mph.

The system is no threat to land and should dissipate by Tuesday.

Tropical Storm Victor is expected to continue to gain strength over the warm Atlantic waters and become a Category 1 hurricane Friday, the National Hurricane Center said.

Tropical Depression Twenty, which formed Wednesday in the far eastern Atlantic, is expected to quickly strengthen into Tropical Storm Victor then become a hurricane in within days, according to the National Hurricane ...Read More

Hurricane Sam continues dancing Monday morning as a powerful Category 4 storm and seems to have partners joining it on the Atlantic basin dance floor in the forms of three other disturbances.