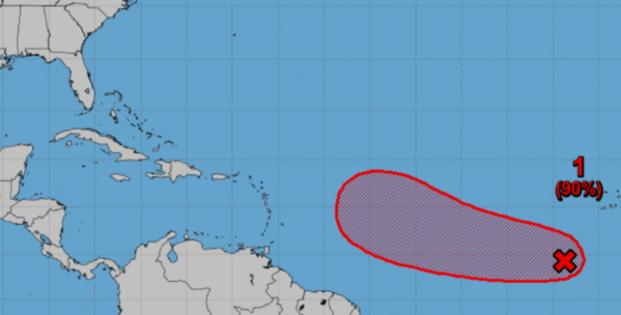 ORLANDO, Fla. — Tropical Depression 18 formed in the eastern Atlantic on Wednesday evening and could be a major hurricane by next week, the National Hurricane Center said in its 5 p.m. Eastern time update.

The depression is expected to strengthen into a tropical storm by Thursday and gain hurricane status by the weekend before being forecast as a major hurricane on Monday, the NHC said. It currently has 35 mph winds as it moves west across the Atlantic at 15 mph. It’s unclear what impact, if any, it will have on land.

If it grows into a tropical storm, it would receive the name Sam.

Meanwhile, Tropical Depressions Peter and Rose seemed to almost be joined together at the hip as they entered the Atlantic together, they degenerated together and they may dissipate together, as well.

As for Peter and Rose, they both formed into tropical storms Sunday and both degenerated into depressions Tuesday. Neither is a threat to land at this time, and both are forecast to dissipate before the end of the weekend.

As of 5 p.m., Tropical Storm Peter had sustained winds of 35 mph and was located about 230 miles north of San Juan, Puerto Rico, moving west-northwest at 5 mph.

It is of no immediate threat to land and is expected to turn northwest and north into the open Atlantic this week. The NHC warns some waves could affect the Virgin Islands, Puerto Rico and Hispaniola, along with the Bahamas.

Meanwhile, Tropical Storm Rose has 35 mph sustained winds and is located about 1,190 miles from the Cabo Verde Islands, moving west-northwest at 10 mph. Forecasters expect Rose to slow down into Thursday as it moves north into the open Atlantic. The system should fizzle into remnants Thursday.

Also, to the north, the remnants of Odette remain a storm-force nontropical low-pressure system located 500 miles west-northwest of the Azores. It could acquire some subtropical or tropical characteristics by the end of the week as it moves east and then south over warmer Atlantic waters. However, as the system south this weekend it is expected to encounter hostile hurdles in the form of strong upper-level winds preventing reformation. The NHC gives it a 40% chance of reformation in the next two days and a 60% in the next five.