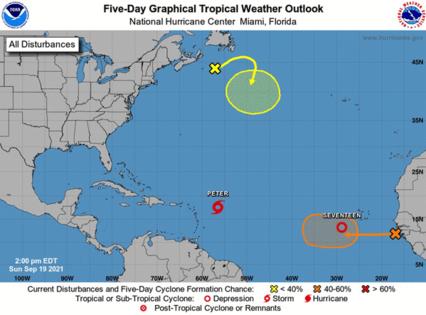 In the National Hurricane Center’s 11 a.m. EDT update, Tropical Storm Peter was located about 435 miles east of the northern Leeward Islands moving west-northwest at 17 mph with sustained winds of 45 mph.

“On the forecast track, the center of Peter is expected to pass well north of the Leeward Islands on Monday and Tuesday,” according to NHC senior hurricane specialist Stacy R. Stewart. “The outer bands south of the tropical storm could produce rainfall totals of 1 to 3 inches with locally higher amounts possible across portions of the Northern Leeward Islands, including the Virgin Islands, as well as Puerto Rico late today through Tuesday. This rainfall may lead to areas of urban and small stream flooding.”

Odette, which had formed Friday evening off the mid-Atlantic coast, became a post-tropical cyclone south of Nova Scotia on Saturday and is still forecast to bring strong winds and heavy rains to portions of Newfoundland on Sunday.

Although the NHC stopped tracking Odette, the system is expected to pass south of Atlantic Canada today and Monday.

“Some strengthening is expected for the next couple of days, and the depression is likely to become a tropical storm tonight or Monday. By Tuesday, environmental conditions are expected to become less conducive for development, and the system is forecast to begin a slow weakening trend.”

Also, a tropical wave is forecast to emerge off the west coast of Africa that could gradually develop as it moves west at about 10 mph. The NHC gives it 40% chance to form into a tropical system in the next five days.

And finally, the remnants of Odette, currently a gale force non-tropical low pressure system located a few hundred miles south of Newfoundland, could acquire some subtropical or tropical characteristics by the middle of this week as it moves east and then south over warmer waters in the Atlantic. The NHC gives it a 30% chance of reformation in the next five days.

After Peter, the next tropical storm will be named Rose. The 2021 season has already seen 16 named systems. That includes five hurricanes, three of which have been major hurricanes of Category 3 strength or higher.