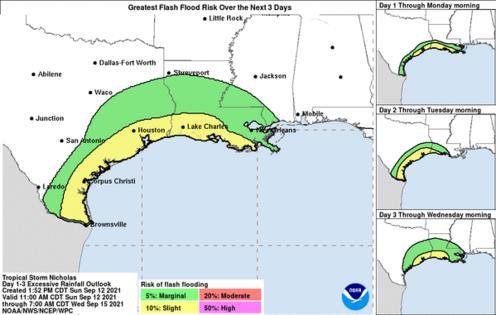 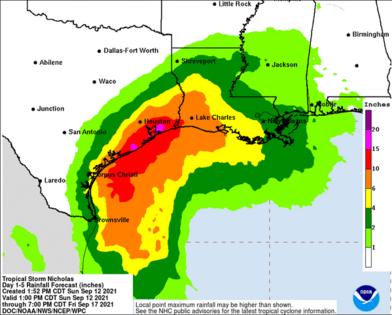 Nicholas is about 170 miles east-southeast of La Pesca, Mexico, and 260 miles south-southeast of the mouth of the Rio Grande. The system is now moving north at 2 mph with maximum sustained winds of 40 mph, according to the NHC’s 8 p.m. update.

Tropical storm warnings and watches remain in effect for territories going from the east coast of Mexico to the south coast of Texas.

“On the forecast track, the center of Nicholas will pass near or just offshore the coasts of northeastern Mexico and South Texas on Monday, and move onshore along the coast of south or central Texas coast Monday night or early Tuesday,” NHC specialist Richard Pasch said.

The NHC is monitoring three other tropical disturbances in the Atlantic that have a chance to become a depression or storm.

There could be a gradual development where the waves transform to a tropical depression early next week as they move west over the Atlantic, according to the NHC.

The closest one to Florida is a low that is expected to form near the southeastern Bahamas in the next few days with a 50% chance of formation by next week. Gradual development is possible as it moves northwest across the Atlantic. It’s still unclear what impact if any it will have on the Sunshine State.

The last disturbance is located a few hundred miles east of the Azores, but there’s an unlikely chance of significant development with a low 10% chance of formation by next week.

If these systems form into tropical storms, they would be named Tropical Storm Odette, Tropical Storm Peter, and Tropical Storm Rose. The 2021 season has already seen 13 named systems including five hurricanes, three of which have been major hurricanes of Category 3 strength or higher.

Meanwhile, Hurricane Larry, which made landfall in Newfoundland Friday night, became a post-tropical cyclone Saturday morning and it continues to produce swells in the North Atlantic shores. The NHC stopped keeping track of it by Saturday evening, but thousands were still without power.