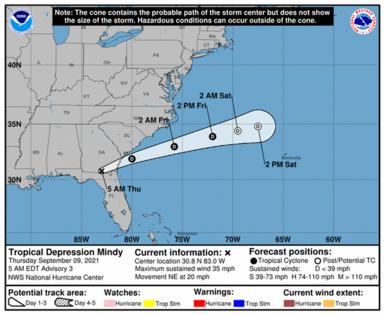 Thousands of Floridians had their power knocked out after the storm, which hit four hours after forming, came ashore with 45 mph sustained winds. Northeast Tallahassee saw a flash flood warning after it received 4 inches of rain, and there were reports of downed trees blocking roads.

The city of Tallahassee tweeted at 7 a.m. Eastern time that of the 9,000 customers who lost power, 7,000 had been restored. As of 8 a.m., Gulf Power’s outage map showed no more outages in the area when Tropical Storm Mindy crossed.

Forecasters said it might see slightly better conditions for strengthening into a tropical depression or storm before it crosses Mexico.

The other disturbance in the Atlantic Basin had a higher shot of strengthening this week. Forecasters said this “strong tropical wave” is expected to emerge off Africa’s west coast on Saturday, and a tropical depression could form next week.

Hurricane Larry, a Category 1 storm with 90 mph winds, passed within several hundred miles of Bermuda on Thursday. The island is under a tropical storm warning.

The powerful storm is set to approach Newfoundland later this week as a hurricane, prompting hurricane watch and tropical storm warnings for the region.

The National Oceanic and Atmospheric Administration on Thursday confirmed what many people felt and saw: California — along with Idaho, Nevada, Oregon and ...Read More