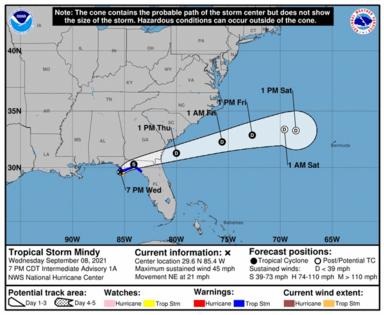 The Florida Panhandle from Mexico Beach to Steinhatchee River was under a tropical storm warning, the hurricane center said.

As of 9:30 p.m. Eastern time, Mindy had sustained winds of 45 mph and was moving northeast at 21 mph. The storm was about 10 miles west-southwest of Apalachicola.

Heavy rain and potential flooding are in the forecast for portions of Florida, Georgia and the U.S. Gulf Coast as the storm cuts across the Florida peninsula.

AccuWeather is predicting 1 to 3 inches of rain along the coastal southeastern U.S., with isolated amounts potentially reaching up to 5 inches possible.

“It’s certainly possible that around midweek we’ll start to see more widespread and heavy rainfall (locally), or at least a higher potential than normal for that depending on just how organized this system gets and the eventual track,” said National Weather Service meteorologist Don Harrigan.

Once Mindy crosses into the Atlantic, forecasters expect it to lose strength and organization.

“Conditions do not appear favorable for restrengthening off the southeastern United States as shear is forecast to increase,” the hurricane center said.

Meanwhile, dangerous swells from Hurricane Larry are expected to impact Florida and the U.S. East Coast starting Wednesday as the still-powerful Category 2 hurricane continues to churn toward Bermuda, where a tropical storm warning is in effect.

And, the hurricane center is watching a storm system that’s forecast to come off Africa’s west coast in a few days. Some development is possible after it moves into the eastern Atlantic.

The next named storm to form would be Nicholas.