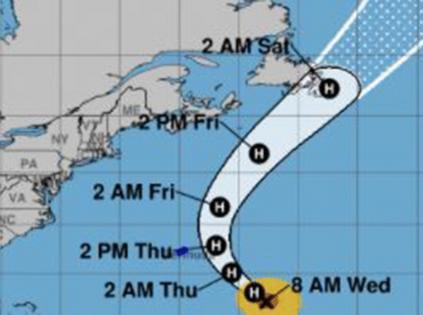 Areas north of Palm Beach County could see waves between 4 and 6 feet in areas such as Martin, St. Lucie and Indian River counties, according to National Weather Service meteorologist Don Harrigan.

The rip currents and swells, which the National Hurricane Center characterized as life-threatening, will also impact parts of the far eastern Caribbean, Bahamas and Canadian shores.

Tropical storm conditions are expected late Wednesday or Thursday in Bermuda as Hurricane Larry churns toward the island with top winds of 110 mph, dropping it to a Category 2 storm. A tropical storm warning has been issued for the island.

Larry is forecast to pass east of Bermuda, making its closest approach Thursday. Because Larry is such a large storm, impacts could be felt well east of the island, the hurricane center said.

Larry’s speed is then forecast to increase as it approaches Newfoundland, Canada. Its intensity could drop as it moves over the cooler water.

“Newfoundland has been the target of nearly three dozen named tropical systems since 1950, although most were downgraded to extratropical systems by landfall,” said AccuWeather Senior Weather Editor and Meteorologist Jesse Ferrell.

Larry’s top winds reached a peak of 125 mph Sunday, just 5 mph shy of the minimum threshold for a Category 4 hurricane.

Forecasters are also watching an area of low pressure in the Caribbean, which is forecast to move across the U.S. Gulf Coast from Louisiana to the Florida Panhandle, possibly as a tropical depression. It’s expected to cut across the Florida peninsula and move into the Atlantic, where some development could take place.

The next named storm to form would be Mindy.