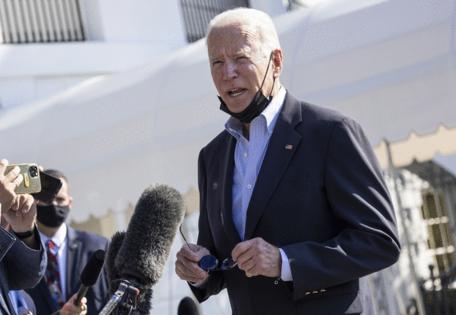 “Even the climate skeptics are seeing that this really does matter,” the president, clad in his Ray-Ban Aviators, said in a speech from a low-lying residential section of East Elmhurst, where he had crossed puddles and greeted locals. “The evidence is clear: Climate change poses an existential threat to our lives and our economy. And the threat is here. It’s not going to get any better.”

Six days after an unprecedented deluge drowned the city, turning subway tunnels into rivers and basement homes into deadly traps, Biden expressed hopes that the hazards can be blunted. At the same time, he predicted that dangerous storms are only going to worsen and that the nation must brace itself for the impact.

“The nation and the world are in peril,” Biden said. “This is Code Red.”

De Blasio — who has faced criticism for not issuing more stern warnings before Ida rolled in last week and killed 13 New York City residents — praised Biden for signing off on the declaration.

“I appreciate him coming here. I appreciate even more that he signed the disaster declaration that will now allow real resources to flow into the hands of New Yorkers,” de Blasio said during a briefing at City Hall on Tuesday morning.

In Biden’s speech, given in an asphalt alley in a working-class neighborhood, the president praised the locals for their generous attitude, and said it’s America’s duty to support communities like theirs.

“This is America, where I’m standing right now,” Biden said, drawing a line between East Elmhurst and other hard-working pockets across America. “It’s about time we step up. They’re always the first ones who are hurt and last ones to get help.”