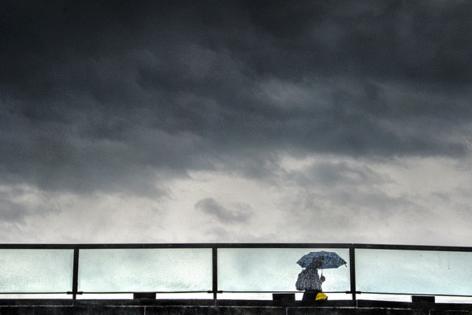 HARTFORD, Conn. — Emergency personnel are responding across the state after Ida dumped more than half a foot of rain on Connecticut overnight, forcing water rescues, closing highways and shutting down all Metro North rail travel into Manhattan. A state trooper was swept away in his police car by floodwaters in Woodbury.

The veteran trooper is in critical condition at Yale New Haven Hospital. The trooper, a sergeant with Troop L in Litchfield, radioed that his cruiser was swept away by floodwater about 3:30 a.m. His cruiser was first found empty. He was later found after searches by ground and from the air with drones and helicopters, Trooper Pedro Muniz said. He was flown to Yale New Haven Hospital by Life Star helicopter.

“Our thoughts and prayers are with the trooper,” he said.

In Bristol, the Pequabuck River and Copper Mine Brook overflowed, forcing firefighters to evacuate a small condo complex on East Main Street and rescue motorists who got stuck on water-filled streets, Mayor Ellen Zoppo-Sassu said.

Twenty-eight condominium residents were taken to the Plainville Fire Department, she said. East Main Street, which is parallel to the Pequabuck, is near the Plainville line. She doesn’t know of any injuries.

“We had, at about 1:30 [a.m.], probably about a dozen roads blocked off. We are down to about three,” Zoppo-Sassu said shortly after 7:30 a.m. Still, she said anyone who needs to drive should be careful.

“They need to proceed with caution,” the mayor said. “The water is deeper than it looks.”

Manchester had 5.36 inches, and Coventry had 6.54. More rain fell in the southern half of the state, with the Uncasville section of Montville getting 8.58 inches and 7.51 falling in Norwich.