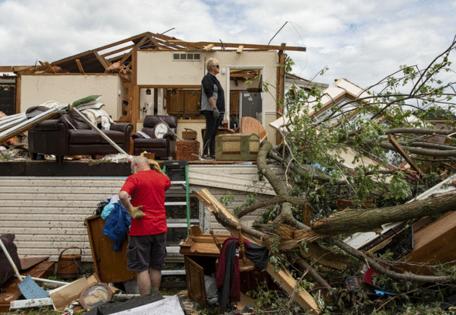 PHILADELPHIA — The atmosphere is often described as an ocean of air, and in terms of the fear and terror they instill, tornadoes thus could be likened to sharks.

Most metaphors being imprecise, the big difference in this instance would be that tornadoes are far more dangerous, as the Philadelphia region just rediscovered.

The raw numbers might suggest that the atmosphere is becoming frighteningly more tornado-infested around here and nationally in recent years, further reinforced by the several tornadoes that touched down Thursday, including the EF3 that devastated part of Bensalem Township with winds up to 140 mph.

Could this be yet another frightening by-product of a warming world?

“We’ve seen some evidence that the variability of tornado incidence has increased,” said Harold Brooks, senior scientist at the National Severe Storms Laboratory in Norman, Oklahoma. But, he added, “We don’t necessarily know the cause.”

Brooks and other experts cautioned against drawing hard conclusions about the trends based on recent tornadic activity.

And Thursday’s outbreak that left ribbons of damage from the Lehigh Valley to Jersey Shore and parts of Delaware might even offer a window unto the reasoning for the caveats, said Matthew Elliott, warning coordination meteorologist for the government’s Storm Prediction Center.

When the storms started popping Thursday afternoon, a whirlwind of reports poured into the National Weather Service Office in Mount Holly. Meanwhile Doppler radar was detecting evidence of tornadoes, and the meteorologists on duty were issuing warning after warning.

If something was spinning out there, said Elliott, someone was bound to know it.

Some tornadoes do swirl in the empty spaces — Brooks told of a 1991 tornado in Alabama with winds perhaps 300 mph, that traveled 66 miles and encountered exactly two buildings — but more places than ever are inhabited, and people are sharing what they witness.