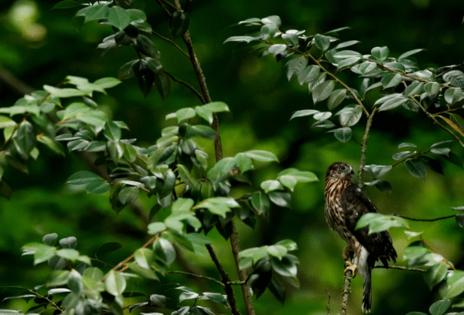 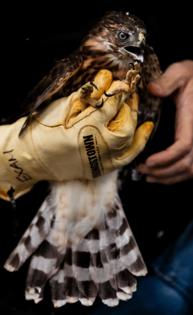 SEATTLE — Naturalist Jeff Brown bounded up a ladder, cradling a baby hawk into his torso as if it were a delicate football.

Brown, who helps rehabilitate wildlife for the PAWS Wildlife Center, stopped about 10 rungs up on this July morning, leaned his weight against a towering maple and slowly stretched out his hand.

The hawk's talons curled around the fingers of Brown's leather glove. It began to chitter with calls of alarm. Then, the baby bird beat its wings in a frenzy and darted tentatively across the shady street.

Just past a neighboring rooftop, Cooper's hawk, Patient #2021-2732, landed on a new perch to assess her surroundings — a place Brown hoped she would recognize as home.

Weeks ago and during a historic heat wave, the bird had apparently jumped from its nest in a towering cedar tree and fallen dozens of feet to the ground.

Bonnie Thompson Norman and a neighbor, who both live near the nest in Seattle's Matthews Beach area, found the grounded bird — not much more than a puff ball that could hardly stand, much less fly — fed it some chicken, then gave it to PAWS for professional care.

"It was such a lightweight," Norman said.

The bird was one of hundreds that came tumbling down during last month's heat wave, which on June 28 sent Seattle temperatures soaring to 108 degrees.

Across the region, people found baby birds, including falcons, terns and eagles, dead or downed and suffering from heat.

"Everything is jumping out of the nest," said Ed Deal, the president of Seattle's Urban Raptor Conservancy. "They're baking in the heat and they're trying to get away from it."