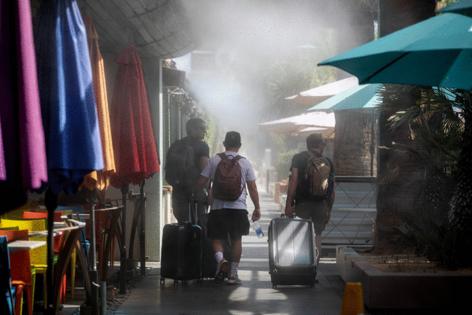 LOS ANGELES — Amid record-breaking temperatures and raging wildfires, California’s energy operator has issued another Flex Alert in an effort to stabilize the state’s electric grid.

Over the weekend, a fast-moving wildfire in Oregon knocked out some transmission lines that carry electricity into California, reducing power supplies by as much as 3,500 megawatts, the California Independent System Operator said. The lines remained unreliable Monday.

Residents are being asked to conserve as much electricity as possible from 4 to 9 p.m. to reduce stress on the system — particularly as continuing high temperatures across the West increase demand.

The National Weather Service said the blistering heat wave that blanketed Southern California this weekend would continue through Monday, with highs well into the 100s across interior areas.

Excessive heat warnings have been issued for the Antelope Valley, interior San Luis Obispo County and Cuyama, areas where temperatures could climb as high as 115 degrees.

Heat advisories also have been issued across Santa Barbara and Ventura counties, the Los Angeles County mountains and the Santa Clarita Valley, which could soar to 109 degrees, forecasters said.

The sizzling conditions will meet with low humidity levels and gusty afternoon winds, said Joe Sirard, a meteorologist with the National Weather Service in Oxnard, leading to elevated fire conditions across Southern California.

California’s wildfire season is already outpacing last year’s — the worst on record — according to the California Department of Forestry and Fire Protection. Over the weekend, the Sugar fire in Plumas National Forest mushroomed to 83,000 acres, becoming the state’s largest wildfire of the year.

As of Monday morning, the fire had grown again to 89,078 acres, with only 8% containment, officials said.

But there is some relief on the horizon, as the heat wave is expected to break into a gradual cooling trend beginning Tuesday.

Anthony Wainscott has known his share of hardship, living the last two years on the streets of California's Antelope Valley. But his personal misery index reached a new plateau during a weekend of record-setting heat.