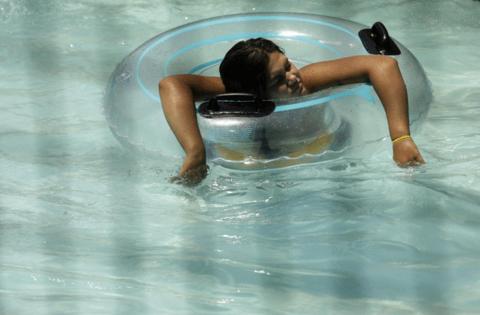 Anthony Wainscott has known his share of hardship, living the last two years on the streets of California's Antelope Valley. But his personal misery index reached a new plateau during a weekend of record-setting heat.

“It’s extra hot. It’s abnormally hot,” said Wainscott, crouched in the meager shade of a palm tree on the edge of a shopping center parking lot Sunday in Palmdale, where the temperature hit 107 degrees. “I don’t even know how to explain it. But there’s something extra playing with the environment right now. And it’s not good.”

The 33-year-old Massachusetts native accepted the occasional donation from drivers, who briefly rolled down their windows to offer some change or a dollar or two. He used a dwindling supply of bottled water to fill a dish for his panting pit bull, Roscoe.

A few businesses would let Wainscott and Roscoe in for a few minutes to cool down, but he found many people’s patience wearing thin, so he spent most of the unbearable day outdoors.

“Nighttime is the only break we get,” he said. “And even then it’s way too hot.”

Like many other California cities, Palmdale saw record temperatures on Saturday — reaching 112 degrees, surpassing the previous daily high of 109 in 2003, according to preliminary figures from the National Weather Service.

Palm Springs saw a high of 111 degrees on Sunday, but that was down from Saturday’s peak of 120, which broke the previous set record for July 10. Also on Sunday, the temperature hit 110 in Lancaster, 101 in Acton and 91 in Riverside. Though coastal areas remained in the 70s and 80s, humidity levels throughout the region brought their own discomfort.

Forecasters attributed the heat wave to an exceptionally large, exceptionally strong area of high pressure hovering over the California and Nevada border that sent temperatures 10 to 15 degrees above normal.

Although such events are fairly typical for this time of year, scientists say they are becoming more frequent and intense as global temperatures rise due to human-caused climate change.

“One hundred twenty degrees in Palm Springs, that’s not normal,” said Ivory Small, a meteorologist with the National Weather Service in San Diego. “So you can tell there’s a big high [pressure system] out there.”