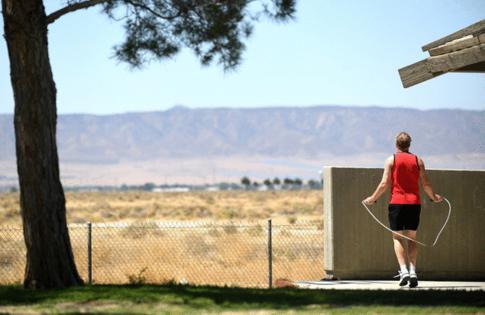 "Heat waves are killers," said retired oceanographer and climatologist William Patzert, noting that more and more people in the Southwest and elsewhere are exposed to dangerous temperatures, even inside their homes.

A heat warning is in effect for the Santa Clarita Valley, Antelope Valley, and parts of the Los Angeles County mountains, set to expire over Sunday and Monday.

The National Weather Service expects "dangerously hot conditions," with temperatures up to 113 degrees in the Antelope Valley — potentially record-breaking heat for this time of year, according to meteorologist David Sweet.

If the Antelope Valley reaches 113 degrees this weekend, it will be far from the first heat record broken in Southern California this summer.

Temperatures of 120 to 128 are expected over the weekend in Death Valley, with daily record high temperatures "likely to be rivaled or broken," according to the weather service.

With highs expected near 112 degrees, "we could be looking at some daily records in Fresno, especially on Sunday and Monday," said meteorologist Colin McKellar at the National Weather Service's Hanford office. In addition, Bakersfield, Merced and other areas of the Central Valley may break daily heat records over the weekend into Monday, McKellar said.

The Indian Wells Valley may experience its hottest day on record, McKellar said, with a high near 118 degrees possible on Saturday.

The Palm Springs area is also expecting a potentially record-breaking heat wave this weekend, with temperatures up to 121 expected across the Coachella Valley, according to the National Weather Service. This weekend, "it's going to be pretty close, probably within a few degrees of some daily records," said meteorologist Bruno Rodriguez with the National Weather Service's San Diego office.