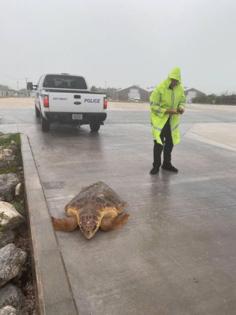 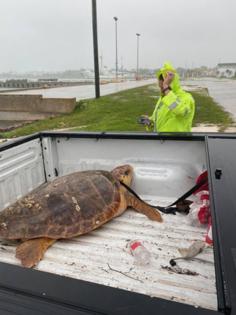 Key West officers helped steer a stranded loggerhead sea turtle back to the ocean on Tuesday morning as Tropical Storm Elsa was sending high winds and rain to the island.

“Police duties vary widely!” the department posted on its Facebook page, along with photos of the turtle and the officers during the assist.

Owned by the U.S. Navy, the Outer Mole is one of three ports that welcome cruise ships and is near the city’s Truman Waterfront Park.

“The turtle had somehow gotten up on the seawall,” Crean said. “They had to lift it up, put it in the truck and take it to the boat ramp. They pointed it in the right direction.”

The turtle appeared disoriented and could not find its way back home to the ocean, Crean said.

“They guided it back to safety,” she said

People in the Keys love sea turtles. There’s even the Turtle Hospital in the Middle Keys city of Marathon. With its ambulance, the nonprofit rescues, rehabs and returns them back to the sea.

Ralph Capone, president and founder of the Key West Sea Turtle Club, couldn’t talk specifically about this turtle rescue because he hadn’t heard the details. But he wasn’t surprised that the police pitched in to help.

“We have a total commitment of the people,” Capone said. “We have the police, the fire department, the mayor.”