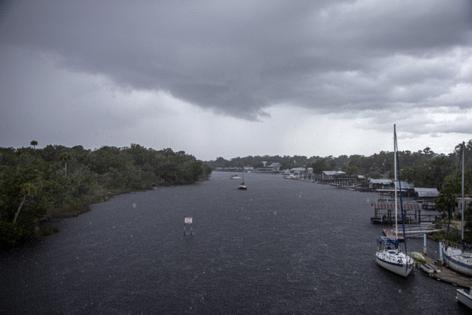 Tropical Storm Elsa’s winds were at 70 mph as of 2 p.m. ET Tuesday, just shy of the 74 mph minimum threshold for hurricane status.

A tornado watch is in effect for South Florida, including Broward, Palm Beach and Miami-Dade counties, until 11 p.m. due to Elsa’s potential for inclement weather on its east side.

Forecasters say Elsa will continue to track to the north and it is expected to move near or over portions of the west coast of Florida on Tuesday and Wednesday. Hurricane Irma took a similar path in September 2017, according to AccuWeather.

As of 2 p.m., Elsa was 95 miles northwest of Key West and 180 miles south of Tampa, moving north at 9 mph. Its tropical-storm-force winds extended up to 70 miles from Elsa’s center.

More than 20 counties along Florida’s west coast are under tropical storm warnings and 12 are under storm surge warnings ahead of Elsa’s arrival, according to Gov. Ron DeSantis.

“We don’t anticipate any widespread evacuations as a result of this storm at this point,” he said Tuesday morning.

Elsa, the earliest-forming fifth storm in recorded history, formed Friday and became the season’s first hurricane before it weakened back to a tropical storm Saturday morning over Haiti and the Dominican Republic.

And it continues to be a record-breaker, according to Dr. Phil Klotzbach, a hurricane expert and research scientist at Colorado State University.

MIAMI — Tropical Storm Elsa approached Jamaica and portions of Cuba on Sunday after lashing the southern coast of Haiti, where its strong wind gusts crushed crops and a tropical storm warning has been discontinued.