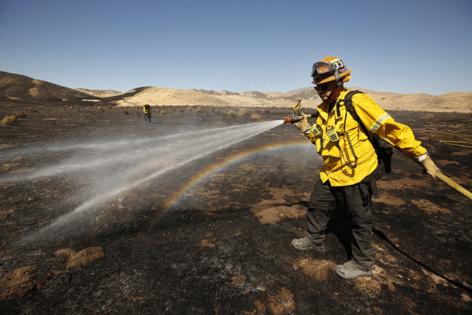 The heat is expected to build throughout the week, with highs soaring into the triple digits in some parts this weekend.

The National Weather Service predicts excessive heat will be possible Friday through Sunday, with temperatures reaching highs of 100 to 112 degrees in the Antelope Valley and the interior of San Luis Obispo County.

The region's valleys and lower mountains may reach highs of 90 to 100 degrees, while the coastal areas are expected in the mid-70s to mid-80s.

Along with the increased heat comes an elevated risk of brush fires. During the Independence Day weekend, fire crews worked across the state to contain multiple blazes that were stoked by hot, dry conditions.

The threat of monsoonal weather is also lurking on the horizon later this week, according to the National Weather Service. "Mid-level moisture and elevated instability" is expected to move over Santa Barbara and San Luis Obispo counties Wednesday and Thursday, forecasters said. Though thunderstorms do not appear likely yet, they could produce dry lightning if they develop.

Although there are no heat advisories in place in Los Angeles County, the National Weather service has said this weekend is "looking like a slam dunk for heat warnings" in the Antelope Valley.

Officials recommend drinking plenty of water, exercising caution while working or playing outside and never leaving children or pets in the car.

An air quality advisory was in effect in Los Angeles, Orange, Riverside and San Bernardino counties on Sunday and Monday after July 4 fireworks.

Though air quality was considered unhealthy on Monday in L.A., the South Coast Air Quality Management district upgraded its forecast to moderate — though still unhealthy for sensitive groups — on Tuesday.

MIAMI — Tropical Storm Elsa approached Jamaica and portions of Cuba on Sunday after lashing the southern coast of Haiti, where its strong wind gusts crushed crops and a tropical storm warning has been discontinued.

Elsa continued to move through the Caribbean Sea Saturday toward the island of Hispaniola, which the Dominican Republic and Haiti share, both nations issued red alerts, warning residents to anticipate massive amounts of ...Read More