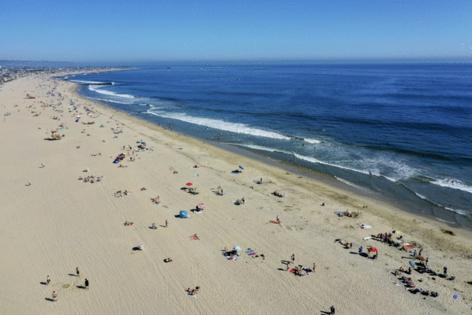 LOS ANGELES — A major heat wave featuring record-high temperatures is expected to sweep over the Los Angeles area this week, with the highest temperatures forecast for Tuesday and Wednesday.

"Summer has definitely arrived," said Rich Thompson, a meteorologist with the National Weather Service. The first official day of summer is June 20.

The heat wave comes amid a lingering drought, increasing the risk of brush fires. It also comes as the region prepares to fully reopen from pandemic-related restrictions Tuesday, and as the city prepares to reopen some of its pools starting Monday.

"We're getting our pools ready for summer!" city parks tweeted last week. The pools all remained closed last summer due to the pandemic.

The heat this week will come under a baking sun, with "very little, if any, of those low clouds and fog along the coast" that can otherwise help to cool the region, Thompson said.

Valley and inland areas could see triple-digit temperatures. In Woodland Hills, the NWS is forecasting a high of 109 degrees on Wednesday — which would break a record for that date of 107 degrees. Lancaster could hit 111 degrees, which would tie the record for heat there, Thompson said.

"There's high potential to break some records across the area," he said.

It will be a little cooler along the beach but not by much, and the NWS has issued an excessive heat watch along the LA County coast and across the region for Tuesday and Wednesday.

The heat watch is in effect for valley areas, deserts and in the mountains from Tuesday through Friday, Thompson said.

Downtown LA is expected to hit 96 degrees on Tuesday, dropping to 92 on Wednesday.

Thompson said things would begin to start cooling off Thursday and into next weekend but that temperatures would remain above average for June.

Because of the heat and drought, there is heightened concern about fires through the week, Thompson said. Moisture in area vegetation is already estimated to be at levels not normally seen until mid- to late July, he said, and the coming heat will only make it worse.

"It's going to be very dry conditions," Thompson said. "There's not going to be any relief in terms of coolness from any moisture."

He advised people stay out of the heat if possible and look out for vulnerable neighbors.

One respite, not available last year, will be city pools. The city last week released a list of 26 pools that will open, with some COVID-19 protocols in place, on Monday.

The reopening of the pools comes one day ahead of a much broader reopening of California on Tuesday, when an array of physical distancing requirements and other pandemic-related limits on businesses will be lifted.

ORLANDO, Fla. — Meteorologists are tracking two tropical disturbances in the Gulf of Mexico and North Carolina coastlines, with the potential of becoming the next tropical depression or storm by next week.

A trough of ...Read More