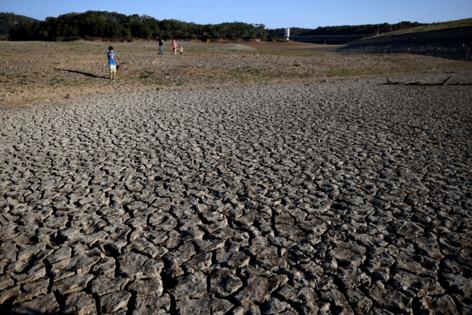 LOS ANGELES — With a worsening drought gripping the West and wildfire season looming, California is bracing for the most severe heat wave of the year — one that promises to tax the state’s power supplies while also offering a grim preview of challenging months to come.

The heat wave will bring triple-digit temperatures to the valleys and inland regions of Southern California as well as many parts of the rest of the state, heightening fire risks. It comes as parts of Northern and Central California are turning to water restrictions as the drought rapidly alters the landscape.

In Lake Oroville over Memorial Day weekend, dozens of houseboats sat on cinder blocks because there wasn’t enough water to hold them. At Lake Mead, the largest reservoir in the United States, the water level dropped to about 1,072 feet Wednesday night — a low not seen since it was filled in the 1930s.

The Colorado River, where the reservoir is located, supplies water for 40 million people in Arizona, California, Colorado, Nevada, New Mexico, Utah and Wyoming. Officials said its water level could fall even farther.

The incoming heat wave can exacerbate that lack of moisture, experts said.

“With high temperatures, we’re going to get more evaporation and less water to use later on. We’re obviously not going to get much rain anytime soon,” said Mike Wofford, a meteorologist with the National Weather Service in Oxnard. “I’m not sure how much worse it makes it. It’s already pretty bad.”

The extreme temperatures are atypical in Los Angeles in June, which is usually still mired in a marine layer with clouds and fog, Woffard said.

The heat will be temporary, but the combination of intensely high temperatures and a prolonged dryness will worsen California’s critical climate condition.

“Early heat waves and more frequent heat waves this summer will exacerbate an already serious situation,” said climatologist Bill Patzert, noting that it is “way too early” in the year for such an event.

“It crosses many boundaries and really impacts everybody,” he said.