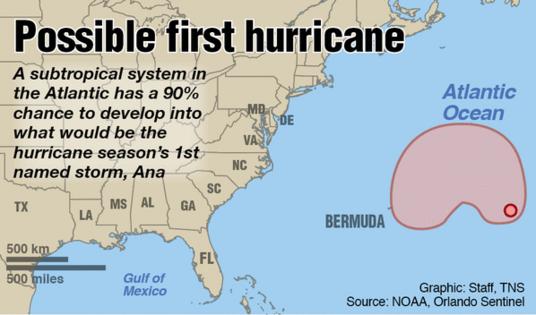 ORLANDO, Fla. – What is likely to become a subtropical system brewing in the Atlantic has a high chance to develop into what would be the Atlantic hurricane season’s 1st named storm, Ana, according to the National Hurricane Center.

Meteorologists increased the odds of development Thursday morning for a non-tropical low-pressure system in the mid-Atlantic to become a subtropical depression or storm, from 90% odds in the next five days to 80% in the same time frame, according to the NHC’s 8 a.m. update. The NHC also estimates a 70% chance the system could develop in the next 48 hours.

The low was first identified early Wednesday within a broad area of cloudiness and thunderstorms about 600 miles east-southeast of Bermuda, said Jack Beven, an NHC hurricane specialist.

As the system moves north, it’s expected to develop gale-force winds. The system should then move over a pocket of warm water Friday allowing it to briefly take on a subtropical-cyclone status near the northeast of Bermuda, Beven said.

On late Sunday, the system is forecast to move out of the warm pocket and into a hostile area of the Atlantic where it should lose some steam.

If the system develops into a subtropical or tropical storm with maximum sustained winds of 39 mph or greater, it will be the first named storm of the year and receive the name, Ana.

If Ana forms, it would do so over a week in advance of the start of hurricane season. That would be the sixth year in a row an early storm developed prior to June 1 and the third year in a row an early storm formed in May. Last year, Tropical Storm Arthur formed on May 16 near Florida, where it skirted by the peninsula as a tropical depression and formed into a tropical storm later out in the mid-Atlantic. On May 27, Tropical Storm Bertha formed; flying over Florida’s east coast as a tropical depression and then later gained enough steam to become a tropical storm before making landfall over South Carolina. It was the first time in four years two storms formed before hurricane season’s start.

The World Meteorological Organization has floated the idea of adjusting the start of hurricane season to an earlier date but has not officially made any plans to do so at this time.

As for the 2021 season, an early storm may not surprise meteorologists who are expecting an above-average, active season. An average season consists of 14 named storms, according to the National Oceanic and Atmospheric Administration. Colorado State University estimates the 2021 season could have 17. AccuWeather also predicted a high estimate of 16-20 named storms. The NOAA has not yet released its 2021 prediction.

Last year, meteorologists also made early predictions for an above-average season. At the end of the 2020 hurricane season, the NOAA recorded 30 named storms — the most ever observed in a single season.