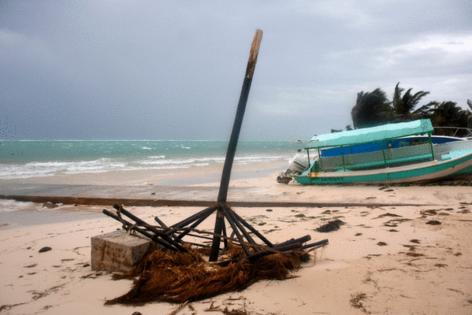 The upgrade means that the 2020 season went from six to seven major hurricanes, which ties the 2005 record.

Hurricane Zeta made its first landfall in Mexico’s Yucatan Peninsula as a Category 1 storm on Oct. 26, 2020, before weakening to tropical storm. It managed to restrengthen into what was previously determined to be a Category 2 hurricane, with winds at 110 mph, prior to its landfall in southeast Louisiana on Oct 28.

However, the latest review showed Zeta’s winds had actually reached 115 mph, making it a Category 3 hurricane. Category 2 hurricanes range up to a maximum wind speed of 110 mph.

Five people died in the U.S. as a result of the hurricane, which also caused $4.4 billion of damage.

Zeta also earned the record for the latest U.S. landfall for a major hurricane, breaking a record held since Oct. 25, 1921, when the Tampa Bay hurricane made its landfall, according to Colorado State meteorologist Philip Klotzbach.

This is the second change to the 2020 season in as many weeks.

On April 20, 2021, the hurricane center determined that Gamma, an early October system previously regarded as a tropical storm, had reached Category 1 hurricane status.

The 2020 season was a record-breaker overall, with 30 named storms.

Also notable, according to AccuWeather senior meteorologist Dan Kottlowski, is the growing trend of late-season hurricanes.

The 2020 season had six hurricanes after Oct. 1, five of which were classified as major hurricanes.

“(Because) the waters are so warm now in some areas of the Caribbean, Gulf of Mexico and Atlantic, we have to be worried about late-season major hurricanes now,” Kottlowski said.