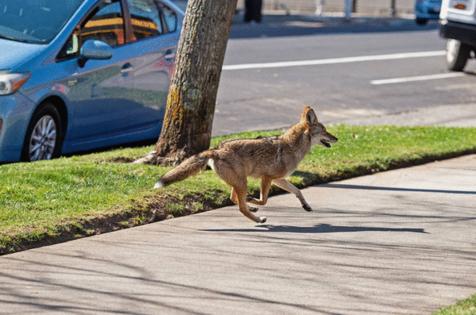 Coyote sightings in urban areas are common. Sacramento’s close proximity to habitats like the American River Parkway, for example, means sometimes these animals can make their way all the way to midtown.

“Coyote attacks on people are very rare,” stated the Humane Society on its website. In most cases, people were bit by a coyote as a result of trying to feed it or “trying to rescue their free-roaming pet from a coyote attack.”

While coyotes prefer prairies and deserts, they appear in the city, hiding behind bushes and wooded patches, according to the Urban Coyote Research Project. In these areas, there’s garbage, mice, rabbits, pet food, compost and — evidently — cats they can hunt.

In a recent California coyote attack, a father saved his toddler from being dragged away in their Woodland Hills neighborhood.

Guy Galante, Wildlife Educator at Project Coyote, shared tips with The Sacramento Bee on what to do if you encounter a coyote:

Coyote in your neighborhood

Spotting a coyote in your neighborhood can be a scary encounter.

“The coyote is an extremely intelligent predator that has adapted to living in close proximity to humans,” the city of Sacramento said on its website.