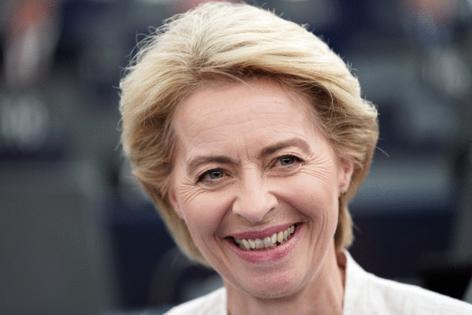 Her remarks came a day before the U.S.-EU Trade and Technology Council ministerial meeting to be held at the University of Maryland, where the law is likely to be a hot topic.

The legislation, known as the Inflation Reduction Act, passed this summer and has become a point of contention in Europe, with complaints that Washington is attempting to lure business investment away from the bloc with massive subsidies.

“We need to do our homework in Europe and at the same time work with the U.S. to mitigate competitive disadvantages,” von der Leyen said in a speech at the College of Europe in Brugge, Belgium.

“The IRA can lead to unfair competition, could close markets, and fragment the very same critical supply chains that have already been tested by COVID,” she said.

The 27-nation EU should respond by improving its state aid framework to facilitate public investment, reassessing the need for further funding of the shift to green technologies, and working with the U.S. to address some of the most concerning aspects of its law, von der Leyen said.

The EU commission chief said that Europe and the U.S. should cooperate to advance the green transition — for example, by agreeing on common standards for electric vehicle charging infrastructure or on critical raw materials for clean technologies, whose production and processing is controlled by China.

“Europe and the U.S. can build an alternative to this monopoly by establishing a critical raw materials club,” von der Leyen said. “The idea behind it is simple: cooperation with partners and allies on sourcing, on production and on the processing gives us the ability to overcome the monopoly.”