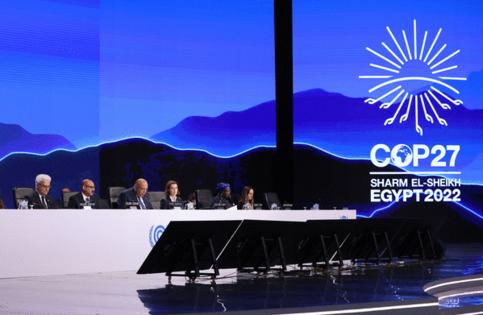 The United Nations climate summit in Egypt this month broke ground with a new agreement to compensate poor nations for the effects of global warming. The creation of a loss and damage fund is an important, if overdue, step toward climate justice and one of the top agenda items at the COP27 summit.

Developing nations have long sought help from rich countries as they bear the brunt of the impacts from the overheating of the planet such as droughts, heat waves and floods, even though they are responsible for virtually none of the emissions causing climate change. Yet for years the United States and other wealthy, industrialized nations have refused to address the harm from their pollution. Many of the details of the fund are yet to be worked out, but it’s a first step toward accountability.

The positive news of the fund, however, was overshadowed by the disappointing lack of action by world leaders, who again failed to do what’s necessary to stop the root cause of the crisis: the burning of fossil fuels. Until we move decisively to end the use of fossil fuels, the debt to poorer nations will continue to grow.

Most countries are falling far short of their climate goals under the 2015 Paris agreement, and the world isn’t moving anywhere near fast enough to cut pollution and keep global warming from reaching catastrophic levels.

During last year’s COP26 summit in Glasgow, Scotland, countries agreed to “revisit and strengthen” their 2030 emissions-reduction commitments by the end of this year, but there’s been a distressing lack of follow-through. By Nov. 18, only 30 countries accounting for 18% of global emissions had updated pledges, and some of those did not even raise their target, according to the Climate Action Tracker.

The final agreement reached in Egypt last week only asks countries that have not yet strengthened their targets to do so by the end of 2023. And despite dozens of nations pushing for stronger language to phase out all fossil fuels, world leaders went no further than repeating the same, embarrassingly weak call for a “phasedown of unabated coal power” that they made last year in Glasgow. The plan encourages renewable energy but at the same time calls for increasing “low-emission” energy, an apparent reference to natural gas, a planet-warming fossil fuel.

If this is the most world leaders could muster against the biggest threat to our planet, it doesn’t bode well for our chances of cutting emissions in half by 2030.

The truth is we can expect only so much from a proceeding that requires buy-in from nearly 200 nations including authoritarian petrostates such as Saudi Arabia and Russia. The annual climate summit has been criticized as little more than venue for greenwashing, where one of the largest delegations is from the fossil fuel industry itself.

The mixed-bag outcome in Egypt, which brought a measure of progress against a backdrop of ongoing failure, shows that making headway against climate change will require constant, year-round follow-up pressure and protest. Leaders at every level of government and society need to know that we are watching and demanding faster, more aggressive action.