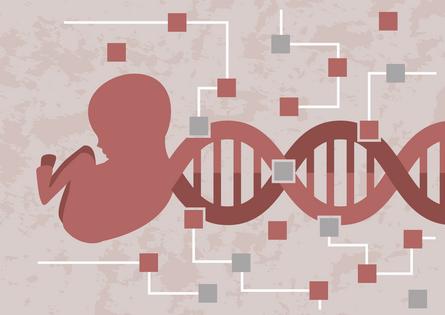 Baby showers. Babymoons. Baby-arrival parties. There are many opportunities to celebrate the 40-week transition to parenthood. Often, these celebrations implicitly assume that pregnancy is cooperative and mutually beneficial to both the parent and the fetus. But this belief obscures a more interesting truth about pregnancy – the mother and the fetus may not be peacefully coexisting in the same body at all.

At the most fundamental level, there is a conflict between the interests of the parent and fetus. While this may sound like the beginning of a thriller, this genetic conflict is a normal part of pregnancy, leading to typical growth and development both during pregnancy and across an individual’s lifetime – something my research focuses on.

However, even though genetic conflict is normal during pregnancy, it can play a role in pregnancy complications and developmental disorders when left unchecked.

Pregnancy is generally thought of as a period when a new individual is created from a unified blend of genes from their parents. But this is not quite right.

The genes a fetus gets from each parent carry slightly different instructions for development. This means there are contrasting and sometimes conflicting blueprints for how to build the new individual. Conflict over which blueprint to follow for fetal growth and development is the essence of the genetic conflict that occurs during pregnancy.

Moms have to use their bodies to help the fetus grow during pregnancy while dads don’t. This means that the genes the fetus inherits from mom have to not only provide for the current fetus, but also try to keep mom alive and healthy and make sure there are resources left over for a potential future pregnancy. These reserves include both biological resources like glucose, protein, iron and calcium, as well as the time and energy needed to help her children after birth as they grow and develop.

Dad’s genes don’t have this same pressure because they don’t use their bodies to help the fetus grow during pregnancy. A dad’s genes, then, don’t need to ensure that anyone other than the current fetus thrives.

To better understand this situation, pretend that all of the resources a mom can give her children come in the form of a milkshake. Once the milkshake runs out, mom has nothing left to give her children. Maternal genes, therefore, want each child to drink only as much as they need to grow and develop. This ensures that the milkshake can be “shared” across all current and future children.

Paternal genes, on the other hand, have no such guarantee of representation in this mother’s other children – the father of the current child may not be the father of the mother’s potential future children. This lack of guaranteed genetic representation means there is no pressure on the father to “share” the milkshake. The best strategy when it comes to paternal genes, then, is for the fetus to drink as much of the milkshake as they can.

These two strategies play a figurative game of tug of war throughout pregnancy. Both sides are trying to pull fetal development slightly more toward their side. Paternal genes encourage the fetus to grow and develop quickly and take more resources, while maternal genes encourage the fetus to grow and use only what’s necessary for proper development. Conflict over how deeply the embryo implants in the uterus and how quickly the placenta and fetus grow are just a few areas where researchers have documented this tug of war during pregnancy.