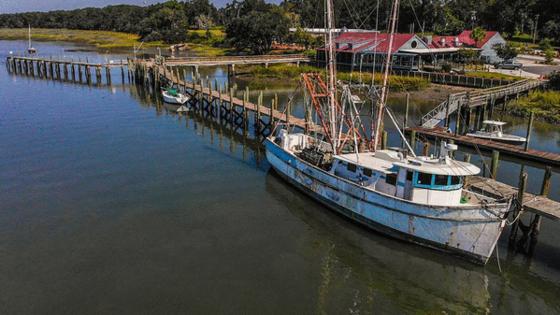 A 70-foot shrimp boat — once docked in the town of Port Royal — has joined New York City subway cars and other unusual materials that make up a man-made reef off of South Carolina’s Hilton Head Island, where black sea bass, grouper and barracuda and other fish hang out.

On Oct. 25, the Palmetto Pride, a shrimp boat with Beaufort-based Sea Eagle Market, captained by Cameron Reaves, towed the Buccaneer to Betsy Ross Reef, 16 miles east of Hilton Head, where it was sunk the next day, said Craig Reaves, Cameron’s brother.

Craig Reeves sees it as a “win win,” he said, because the older shrimp boat will benefit both the environment in its new life and Port Royal’s efforts to remove old boats from its water prepares as it prepares to build a new shrimp dock and processing facility.

The Reaves family worked with South Carolina Department of Natural Resources, which runs the state’s artificial reef program, to clean up and sink the vessel, which Laten Reaves, Craig and Cameron Reaves’ father, had purchased from the Florida owner. The engines of the boat, Reaves said, no longer worked, Craig Reeves said, and the owner had to leave the Port Royal dock because it’s being replaced.

The Coastal Conservation Association, Reaves said, was also assisted in the project.

The iron-hulled Buccaneer will have a new purpose at Betsy Ross Reef, one of more than 40 artificial reefs the SCDNR manages in waters along South Carolina’s coast that benefit marine life.

Besty Ross is named after a 430-foot liberty ship, which is the largest piece of artificial-reef structure off the South Carolina coast. New York City subway cars, bridge sections, a 105-foot tug boat and a 100-foot barge also are among the items that make up the reef, which provides food and shelter for fish and other marine life.

“The subway cars and military vehicles,” Craig Reaves said, “are some of the neatest things that go down out there.”

Sea Eagle Market, Reaves said, has worked with the state’s reef program before in preparing boats for sinking. It receives compensation for its expenses.

Artificial reefs off South Carolina are especially important to fisheries because of the lack of hard-bottom areas suitable for natural reef formation, the DNR says. Durable materials like old boats are eventually covered by algae, barnacles, corals and sponges, it says, which attract fish.

In June, the Buccaneer was towed from the Town of Port Royal dock to Sea Eagle Market docks on St. Helena Island. Over the next three months, its engines, oil and Styrofoam — anything that could potentially harm the environment — were removed.

Access points were cut out below the boat’s water line and covered with patches, Craig Reaves said. Later, at the reef, those patches were removed and the Buccaneer was filled with water. It sank, in two hours, in 90 feet of water.

In April, the Town of Port Royal gave owners of old and/or abandoned boats tied to the dock a deadline to move.

The town also is moving forward with an ordinance aimed at preventing boats from being abandoned in its waters in the future. It would require a permit for mooring a boat, prohibit mooring too close to public boat landings, bridges, private docks and marinas, and ban derelict or abandoned vessels. Police would be given the authority to seize and tow vessels in violation.

The work comes as the town prepares to replace its iconic but dilapidated dock, one of few publicly owned commercial fishing docks remaining in the state. In July 2021, lawmakers OK’d $900,000 for a new shrimp dock. The town also plans to put $600,000 it received in an insurance settlement toward the dock and a new processing facility.

Town Manager Van Willis said the town is awaiting action from a federal court giving it the authority to either auction or destroy the two remaining boats that remain tied to its old dock, a shrimp boat and a sail boat.