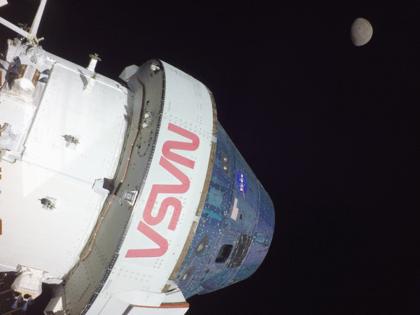 ORLANDO, Fla. — NASA officials said the Orion spacecraft is approaching its farthest distance from Earth on Monday, two days after breaking a record set by Apollo 13.

On Saturday, Orion, which launched atop the Space Launch System rocket from Kennedy Space Center on Nov. 16, surpassed the previous record of 248,655 miles from the planet, which was the farthest away from Earth astronauts Jim Lovell, John Swigert and Fred Haise traveled during their aborted 1970 moon-landing mission.

The uncrewed Orion, which has three mannequin passengers on board, is set to travel to 268,554 miles from Earth by 4:48 p.m. Eastern time as part of the capsules’ distant retrograde orbit (DRO) around the moon.

Retrograde means the orbiting spacecraft circles the moon opposite the moon’s spin and orbit of the Earth. The distant part means that Orion’s lunar orbit will reach nearly 40,000 miles from the moon’s surface.

Orion entered DRO on Friday after having performed a slingshot around the moon on its closest approach last week, coming in about 81 miles from the surface.

NASA plans to have Orion complete only one half of this orbit, so that on Thursday, NASA managers look to fire up its engines again to bring it back down for a close approach to the lunar surface. It will then approach and swing back around the moon on Dec. 5 to begin a return on a speedy trajectory to Earth for a splashdown in the Pacific Ocean on Dec. 11.

The No. 1 milestone for the mission is to prove Orion’s heat shields can withstand re-entry. The expected speed of 24,500 mph that would generate near 5,000 degrees Fahrenheit would also set a record for human-rated spacecraft.

If all goes well, NASA can move forward with its planned crewed orbital mission to the moon — Artemis II — planned for no earlier than May 2022, but that could slip since it takes about two years from when the crew is named before it can launch, according to NASA astronaut Stan Love.

“Nothing until this flight gets back safely,” he said ahead of liftoff at KSC. “I would expect in the spring of 2023, we would hear who’s going to be on the next one.”

That said, Love expects to be named a capsule communicator (CAPCOM) from mission control in Houston for Artemis II and work has been rolling on it for months.

It isn’t until Artemis III that NASA aims to return humans, including the first woman, back to the lunar surface for the first time since 1972.

That mission is planned for no earlier than 2025, with successive lunar missions planned for about once a year after, although, again each mission’s target dates can be delayed.

“It’s possible that schedule may change,” Love said. “If you’ve been reporting space for a while, you probably know that space dates are not always 100% reliable.”

SACRAMENTO, Calif. -- The final tallies are in, and it’s been another good year for monarch butterflies in California.

In total, 335,479 of the important pollinators were counted across 272 overwintering spots across ...Read More

Now for some good news about our planet: The ozone layer is healing.

A recent United Nations-backed assessment found continued progress in the global effort to repair the shield-like layer high up in the stratosphere that...Read More

When Microsoft released its Xbox One Elite Wireless Controller in 2015, PlayStation fans were wondering when the company would release its own premium controller. After all, PlayStation had released some of the biggest ...Read More

This week a reader writes that she’s been getting 25 or more spam emails per day that end up in the junk folder of her AOL email account.

She uses an iPhone 8 for her email.

She says the same people keep sending the ...Read More

The “Like a Dragon” series is no stranger to spinoffs and fresh takes on the series. It’s been through a zombie apocalypse and a story focused on the other side of the law. It has revamped its combat system and ...Read More