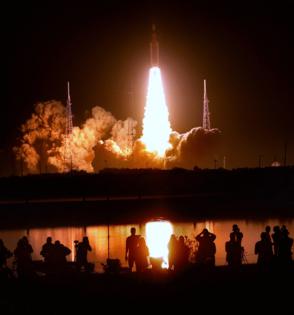 ORLANDO, Fla. — NASA’s Space Launch System roared off the launchpad at Kennedy Space Center and into the record books, for now.

The SLS rocket, using a combination of two solid rocket boosters with a core stage consisting of four repurposed RS-25 engines from the space shuttle program, produced 8.8 million pounds of thrust to lift the Orion spacecraft into orbit and help send it on its way to the moon for the uncrewed Artemis I mission.

Its success makes it the most powerful rocket to ever blast into space, besting the power of the Saturn V rockets used during the Apollo moon missions five decades ago, which produced 7.5 million pounds of thrust.

The Soviet Union attempted to launch a rocket called the N-1 on four attempts from 1969-1972 that produced 10.2 million pounds of thrust, but they all failed midflight and never made it to space.

“I will simply say that the results were eye-watering. The rocket performed and or exceeded expectations,” he said during a recent news conference.

The SLS design is similar to the approach of the space shuttle, the launches of which produced a little over 6.4 million pounds of thrust during their run from 1981-2011. Space shuttle launches, though, had only three RS-25 engines fed by fuel from the massive external fuel tank, while its two solid rocket boosters were not as tall as the SLS versions, which string together in five segments instead of four.

Of note, the reusable RS-25s have all flown several shuttle missions including on Atlantis, Endeavour, Discovery and even one used on a previous Space Shuttle Columbia flight before it was destroyed in 2003 returning from orbit.

NASA touts SLS as the only rocket capable of transporting both crew and cargo for its deep-space destinations. A crewed Artemis II flight on an orbital moon mission is slated for no earlier than May 2024.

Artemis III, which looks to return humans, including the first woman, to the lunar surface for the first time since Apollo 17 in 1972 is scheduled for no early than the following year.