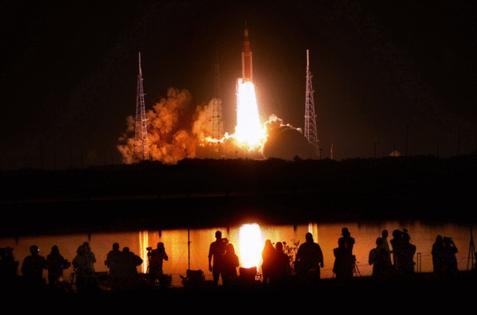 ORLANDO, Fla. — The Artemis I mission brought Orion on its closest approach to the moon while blasting out on its way to an orbit that will take it farther from the Earth than any previous human-rated spacecraft.

Orion entered the moon’s gravitational influence on Sunday and used that power along with a thruster on an outbound powered burn to come within 81 miles from the lunar surface. It will over the next week get as far as about 40,000 miles away from the moon.

“This is one of those days you’ve been thinking about and dreaming about for a long, long time,” said NASA flight director Zeb Scoville. “This morning we just saw the Earth set behind the moon as we take the next human-rated vehicle around the moon preparing to bring humans back there within a few years. This is a game changer.”

Orion launched from Kennedy Space Center on Nov. 16 atop the Space Launch System becoming the most powerful rocket to successfully launch from Earth into space with its 8.8 million pounds of thrust.

Built by primary contractor Lockheed Martin and originally designed for NASA’s defunct Constellation program that was canceled in 2010, Orion shifted to become the prime spacecraft for the new Artemis deep-space program with plans to travel to the moon and eventually to Mars.

The 25.5 day mission is set to orbit the moon on this distant retrograde orbit, meaning opposite the spin of the moon, several times before returning to Earth for a splashdown in the Pacific Ocean on Dec. 11.

This first one will take around six days. The outbound powered flyby began at 7:44 a.m. EST with the closest approach around 7:57 a.m.

Since it flew around the far side of the moon, Orion lost communication with NASA for about 34 minutes.

The 2-minute, 30-second burn with 6,000 pounds of thrust comes from Orion’s Orbital Maneuvering System (OMS) engine, which previously flew on 19 missions of the Space Shuttle Program between 1984 and 2002. In total the service module has 33 engines, all from contractor Aerojet Rocketdyne, to allow for smaller adjustments to flight.