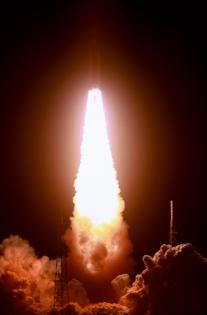 There's radiation. A thin atmosphere. No air to breathe.

If NASA ever establishes a lunar base — a long-term project advanced Wednesday with the launch of Artemis I — it will have to confront these challenges to human habitation.

It'll also have to figure out the dust.

Lunar dust is made of gnarly little particles — jagged and sharp-edged grains that add up to a major problem for astronauts and just about any human-made object that's supposed to land or take off from the moon.

For years, NASA scientists have studied just how much damage that dust, along with lunar gravel and rocks, could cause, particularly when it gets kicked up by rocket engines and starts jetting about at speeds faster than a bullet.

"This is not just fluffy dust that's going to put a little coat on your ... hardware," said Philip Metzger, planetary scientist at University of Central Florida who has researched the effects of interplanetary dust since 1997. "This is sandblasting, damaging; it's rocks at high velocity, sand grains, high-velocity gravel."

One of the foremost institutions studying lunar dust and its potential effect on human missions is the Swamp Works, a NASA research lab co-founded in 2013 by Metzger, who is now retired from the agency but still collaborates on some projects.

Based at Florida's Kennedy Space Center in a boxy building once used to train Apollo astronauts, the lab aims to rapidly pioneer and test technologies that would allow humans to live and work on other planetary bodies.

The Artemis 1 mission won't land on the moon, but the Orion crew capsule will travel around the moon on a 25-day journey to test the spacecraft's capabilities before humans get onboard next time.