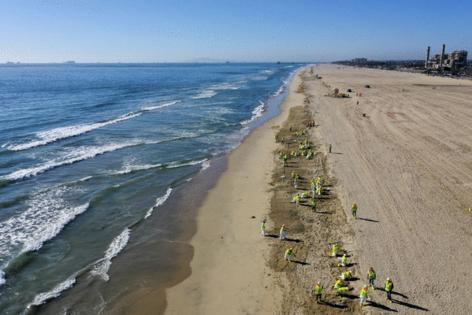 LOS ANGELES — The Houston-based company operating the oil pipeline that ruptured off Huntington Beach last fall announced Saturday that the government has green-lighted its plans to repair the pipeline, raising the possibility it will be operational again early next year.

In a press release, Amplify Energy Corp. said the U.S. Army Corps of Engineers has granted it a permit to remove and replace damaged segments of the pipeline, a job that is estimated to take about a month.

The pipeline runs from a plant in Long Beach to the Elly platform in federal waters off Huntington Beach. At least 25,000 gallons of crude oil gushed from the broken pipe last October, forcing a weeklong closure of beaches along the Orange County coast in October and a monthslong shutdown of fisheries.

In August, Amplify Energy and two of its subsidiaries pleaded guilty to negligently discharging oil and agreed to pay nearly $13 million in criminal fines and cleanup fees.

Amplify also said it had reached a settlement with businesses and property owners claiming spill-related losses.

Amplify contends that the pipeline had been damaged by the anchors of container ships nine months before the spill, and that it had not been properly notified.

Last week, the Center for Biological Diversity sued the Bureau of Ocean Energy Management in federal court, claiming the Biden administration was improperly allowing rigs in the oilfield off Huntington Beach to continue operating under outdated safety plans devised in the 1970s and 1980s.

"It's time to get these rusty relics out of our ocean," Kristen Monsell, legal director of the Center's Oceans program, said in a press release, comparing the aging oil platforms to "ticking time bombs."

Are coincidences just random acts, or the work of fate or God? You be the judge for these five extraordinary coincidences.

John Adams and Thomas Jefferson, the second and third presidents of the United States,...Read More

Microsoft Corp. is ready to fight for its $69 billion acquisition of gaming company Activision Blizzard Inc. if the US Federal Trade Commission files a lawsuit seeking to block the deal, according to a person familiar with...Read More

A biodiversity crisis is reducing the variety of life on Earth. Under pressure from land and water pollution, development, overhunting, poaching, climate change and species invasions, approximately 1 million plant and ...Read More

Apple Inc. is ramping up work on a mixed-reality headset, its first major new product category since the Apple Watch, and has renamed the accompanying software in the latest sign of an approaching debut.