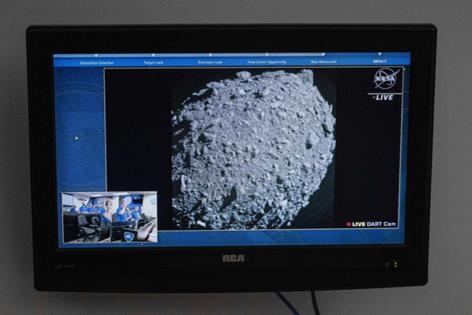 NASA this week successfully did what it normally tries to avoid, and destroyed one of its own spacecraft — by ramming it into an asteroid. It was the first step in an experiment that could one day spare humanity from the fate of the dinosaurs by knocking a celestial threat off course. In an age when science is too often under attack from climate change deniers, anti-vaxxers and others, it’s a timely reminder that scientists are, in fact, on the good side.

The space agency’s Double Asteroid Redirection Test, aptly given the acronym DART, aimed a refrigerator-sized spacecraft at a football-stadium-sized asteroid and, on Monday evening, scored a bull's-eye. The idea is to see whether striking the asteroid, called Dimorphos, might change its trajectory. Dimorphos circles a larger asteroid in a known orbit, so NASA should be able to ascertain within a few months whether it has successfully altered that orbit — which would be a first in human history.

The stakes couldn’t be higher. There are no non-avian dinosaurs in today’s zoos because, 66 million years ago, a six-mile-wide asteroid struck Earth in what is now Mexico, raising smoke and dust that blotted out the sun worldwide for years and starved them into extinction.

There are no known extinction-level asteroids on course toward Earth within at least the next 50 years, but the law of averages says it will happen again someday. If an approaching object can be intercepted millions of miles out and years in advance, even a small nudge could mean the difference between the continuing advancement of civilization or a return to the Stone Age.

The success of the NASA test so far has been an astonishing scientific feat with the single-minded goal of protecting humanity. Back on Earth, exactly the same can be said of the lightning-fast development of coronavirus vaccines, and the continuing efforts by scientists to quantify and address the looming threats posed by human-caused climate change. Yet in too many corners of American politics, these steady societal servants of fact-based expertise have been trashed as anti-industrial zealots or vaccination conspirators.

The right’s bizarre fixation on Dr. Anthony Fauci, condemning him as the villain of the pandemic rather than its most prominent hero, is just one example of this toxic phenomenon. Another is the fact that more than 95% of scientists agree that human activity has caused the destructive climate change that is more obvious by the year — yet more than 100 members of Congress continue to deny it.

Scientists aren’t flawless or all-knowing, but they deserve more trust than those who impugn their expertise and motives for the sake of demagoguery. Whether the threat is from space, or a virus, or humanity’s own environmental shortsightedness, the solution is to trust the science — and to reject the know-nothing extremism that afflicts too much of a nation’s politics today.

The cryptocurrency industry is circling the wagons in defense as hackers siphon more money from the sector each year.

Hackers made off with more than $3 billion in digital assets so far this year, according to research ...Read More

White-supremacist ideas gained significant exposure through online video games this year, particularly among adults, according to a new report from the Anti-Defamation League.

One in five adults reported being confronted...Read More

LOS ANGELES — The Los Angeles City Council has approved a new ban on certain single-use plastics, taking the latest step in an effort toward becoming a "zero-waste" city.

Many neurodegenerative diseases, or conditions that result from the loss of function or death of brain cells, remain largely untreatable. Most available treatments target just one of the multiple processes that can lead...Read More

A longstanding medical myth suggests that taking vitamin B1, also known as thiamine, can make your body repel mosquitoes.