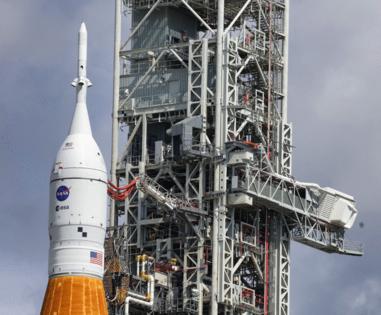 But it held off a decision to roll the massive 5.75-million-pound, 322-foot-tall combination of Space Launch System rocket, mobile launcher and Orion spacecraft to the safety of the Vehicle Assembly Building.

In an update posted to NASA’s website, the decision on whether or not to stay on the pad during the impending storm won’t be made until Sunday.

“During a meeting Saturday morning, teams decided to stand down on preparing for the Tuesday launch date to allow them to configure systems for rolling back,” the update reads. “If Artemis I managers elect to roll back, it would begin late Sunday night or early Monday morning.”

That will allow another day of updated forecasts for what is currently Tropical Storm Ian located in the central Caribbean. Forecasts have it shifting north over Cuba and sitting off Florida’s southwest coast on Tuesday with a potential landfall near Sarasota as a Category 3 hurricane with 115 mph winds on Wednesday.

“The agency is taking a step-wise approach to its decision making process to allow the agency to protect its employees by completing a safe roll in time for them to address the needs of their families while also protecting for the option to press ahead with another launch opportunity in the current window if weather predictions improve,” the statement reads.

In a briefing Friday, missions managers noted the rocket was certified to endure 85 mph sustained winds on the launch pad. A rollback would take about three days to ready the hardware for traveling and make the slow 4-mile trip back to the VAB from Launch Pad 39-B. Previously, officials had said the rolls to and from the VAB can put more stress on the hardware, so if they can, staying at the launch pad is preferable.

“We’ve got a robust design, but we want to protect the vehicle,” said John Blevins, SLS chief engineer.

If managers elect to stay on the pad, the next opportunity to launch during this window is Sunday, Oct. 2, a 109-minute window that opens at 2:52 p.m. and fly for roughly a 41-day mission and land on Nov. 11.

After that, NASA would have to stand down until the next available windows on Oct. 17-31, Nov. 12-27 and Dec. 9-23. Each window has only certain days during which the Earth and moon are in the right position for the planned mission.

Artemis I is an uncrewed mission that combines the mobile launcher, Space Launch System rocket and Orion spacecraft. The SLS’s 8.8 million pounds of thrust at liftoff would become the most powerful rocket to ever launch from Earth besting the Saturn V rockets from the Apollo missions.

The Orion spacecraft will be propelled into a trans-lunar injection during which plans are to send it to as far as 280,000 miles away, 40,000 miles farther than the moon. It will make several orbits of the moon over several weeks before returning to Earth faster than any human-rated spacecraft has ever attempted reentry, coming in at 24,500 mph creating heat of 5,000 degrees Fahrenheit.

The goal is to make sure Orion can endure extremes to keep humans safe on future missions. If successful, Artemis II could fly with a crew to orbit the moon in 2024 and Artemis III could fly as early as 2025 to return humans including the first woman to the lunar surface for the first time since Apollo 17 in 1972.

Great white sharks typically gather along the North Carolina coast in the winter but researchers aren’t sure why it happens.

Then one clear afternoon, binoculars slung over his shoulder and ...Read More

MIAMI — Florida’s sandy beaches aren’t just beautiful and one of the biggest money-makers in the state’s tourism-based economy. They’re also the first line of defense against storm surge flooding during ...Read More

The United Nations climate summit in Egypt this month broke ground with a new agreement to compensate poor nations for the effects of global warming. The creation of a loss and damage fund is an important, if overdue, step...Read More