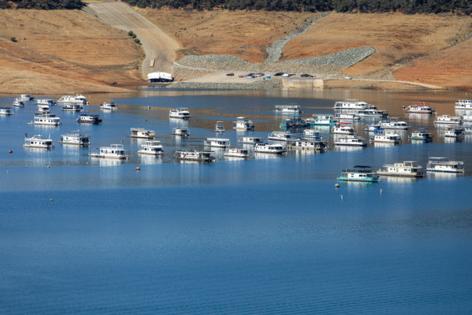 The latest climate forecasting update from the Department of Water Resources came Wednesday, just days before the end of the water year, which runs from Oct. 1 to Sept. 30 in California. Officials said some of the state's biggest reservoirs, including Lake Oroville and Lake Shasta, are slightly more full than they were at the same time last year, but still remain well below average.

"We have more storage in the reservoirs, but we're still well below average, well below where we'd like to be," Yarbrough said. What's more, "we have to prepare and expect that we're going to see things that we haven't seen before."

Part of the challenge facing the state's water managers is that climate change is making it more difficult to predict and prepare for water outcomes, Yarbrough said. During the 2022 water year, officials observed significant swings between extreme wet and extreme dry conditions, including a notably rainy October through December followed by the driest January through March on record.

"When we look at patterns like this, it really challenges a lot of our practices for how we plan the system, for how we're going to operate for the next year," he said.

Still, Yarbrough emphasized that California remains in serious drought. Even with improved storage, Shasta sits at about 34% of its capacity, according to The Times' drought tracker.

It's "better than last year but not good enough," he said.

Coastal urban centers around the world are urgently looking for new, sustainable water sources as their local supplies become less reliable. In the U.S., the issue is especially pressing in California, which is coping ...Read More

This episode of The Conversation Weekly podcast is about the Thwaites Glacier in Antarctica. Thwaites is among the largest glaciers on Earth and one of the single most important factors for future global sea level rise....Read More

The classic Japanese role-playing game lives on in all its turn-based glory through Atlus, the company that gave us the "Shin Megami Tensei" franchise and "Persona" and the highly underrated "Tokyo Mirage Sessions."

Anker is taking charging to a new level with the new series of GaNPrime higher-wattage charging solutions. They are designed to work with just about every USB charging device, including smartphones, tablets, gaming ...Read More

This column might seem silly, but the advice I’m about to give you is beautiful in its simplicity, and it fixes so many problems.

I’ve been an IT guy for more than 25 years. I’ve seen every type of issue, both in ...Read More

At first glance, “Omega Strikers” looks a little like air hockey. You see an object in the center called the Core and it bounces around the map like a puck. The goal of the game is to hit the Core into the goal. But ...Read More