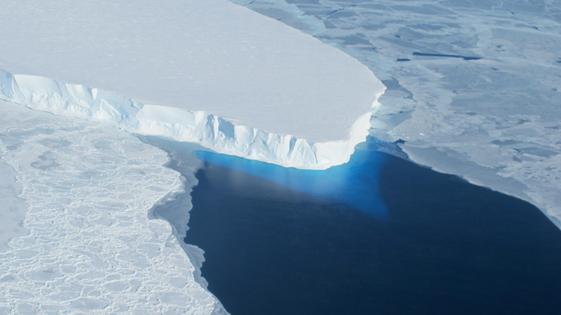 This episode of The Conversation Weekly podcast is about the Thwaites Glacier in Antarctica. Thwaites is among the largest glaciers on Earth and one of the single most important factors for future global sea level rise. We talk to three experts about what makes Thwaites so uniquely significant, why it’s melting and the creative techniques sceintists are using to study it.

Thanks to climate change, ice all over the world is melting. Greenland, the Arctic the Himalayas and Antarctica are all experiencing the fastest melting in recorded history.

As ice that is currently sitting on land melts, it flows downhill and eventually reaches the ocean. If the ice melts faster than snow replenishes the glaciers, sea level rises.

The Thwaites Glacier is one of many bodies of ice that are melting, but this massive, Antarctic glacier is uniquely important when it comes to sea level rise. “We’re talking about an area that’s the size of the island of Great Britain,” says Ted Scambos, a glacier scientist at the University of Colorado in the US and the principle investigator of the Science Coordination Office of the International Thwaites Glacier Collaboration.

If – or when – the entire Thwaites Glacier melts, Scambos says it will result in around 0.6 meters of sea level rise. But the interior section of Thwaites is surrounded by other massive ice sheets that cover west Antarctica. And since Thwaites sits in a giant, low elevation basin, if it melts, the rest of the ice will flow into the basin and melt, too. Add all that ice up and you get more than three meters of sea level rise.

What makes Thwaites such a significant contributor to sea level rise is where it sits on the continent of Antarctica. It’s shaped sort of like a lollipop with the candy part sitting in a giant basin and the stick extending out from the continent to the ocean. And that stick is melting quickly.

Yixi Zheng is an oceanographer at the University of East Anglia in England and has recently been down to Antarctica to study how Thwaites is melting. She describes the scene in visceral terms. “You can really see the icebergs and the glaciers and they are melting. You can see the water dripping from the glaciers,” she tells us. “We get really emotional. They were pretty much crying.”

Paul Holland, an ocean and ice scientist with the British Antarctic Survey, has been looking at why the ice is melting, focusing on changes to the winds that bring warmer water down to the Amundsen Sea next to Thwaites. “The question is, if we reverse these greenhouse gas induced wind changes, what effect does that have? What’s going to happen to the ice sheet? Will it regrow or will it take many centuries to stabilise and then it might regrow?” says Holland. Thanks to his work and the work of researchers like Zheng and Scambos, scientists are starting to find the answers.

Listen to the full episode to hear how Thwaites’ unique shape makes it so scary, what researchers know about why it’s melting now and how seals are helping collect data on the glacier in places no human could ever go.

This episode was produced by Mend Mariwany, with sound design by Eloise Stevens. The executive producer was Gemma Ware. Our theme music is by Neeta Sarl. Sound of seals snoring in this episode from Nick Roden, and ice cubes from Idalize via Freesound.

You can find us on Twitter @TC_Audio, on Instagram at theconversationdotcom or via email. You can also sign up to The Conversation’s free daily email here. A transcript of this episode will be available shortly.

You can listen to The Conversation Weekly via any of the apps listed above, download it directly via our RSS feed, or find out how else to listen here.

Read more:
Ice world: Antarctica’s riskiest glacier is under assault from below and losing its grip

Antarctica’s ‘doomsday’ glacier: how its collapse could trigger global floods and swallow islands

For many Americans, pumpkins mean that fall is here. In anticipation, coffee shops, restaurants and grocery stores start their pumpkin flavor promotions in late August, a month before autumn officially begins. And ...Read More

Eyes wide, a baby reaches for a toy. Her caregiver, sensing her interest, brings the toy within her grasp.

“Ga!” the baby exclaims, and her caregiver responds, “Yes!”

When the baby fusses, her ...Read More

Arati Prabhakar has been sworn in as director of the Office of Science and Technology Policy and assistant to the president for science and technology after being confirmed by the U.S. Senate, two months following her ...Read More

LOS ANGELES — For as long as the Salton Sea has faced the threat of ecological collapse, some local residents and environmentalists have advocated a radical cure for the deteriorating lake: a large infusion of ocean ...Read More