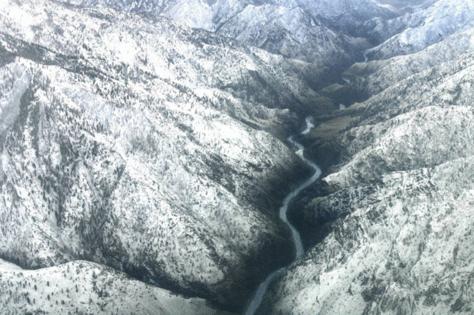 Protecting salmon in the Middle Fork of the Salmon River will be especially critical for species survival, several scientists told the Idaho Statesman. Chinook salmon born in the crystal-clear waters of the Middle Fork might be able to adapt to climate change, researchers say, and if bigger threats like hydropower systems are removed, wild salmon could have a fighting chance.

The Middle Fork is the “crown jewel” of salmon habitat in the Northwest, Idaho Fish and Game fisheries biologist Tim Copeland told the Statesman.

“Those are the best populations,” Copeland said. “And if they can’t make it, none of them are going to make it.”

Sprawling through 2,800 square miles of nearly untouched wilderness, the Middle Fork remains home to almost all the species that were there when Lewis and Clark arrived in the early 1800s. And it’s one of the most productive salmon habitats in the Pacific Northwest.

Almost all of the Middle Fork’s Chinook are wild, which means they haven’t bred with salmon released from hatcheries. The wild fish have high genetic diversity — a rarity in the Columbia River Basin, Scott Brandt, fisheries biologist at Boise National Forest, told the Statesman.

Genetic diversity is key to resiliency and thus key to the species’ survival, Brandt said. With the highest number of returning salmon per spawning adult reported in scientific literature, Central Idaho’s Chinook are quick to take advantage of favorable conditions.

The salmon also spawn at 6,000 feet, the highest elevations of any spring and summer Chinook salmon population in the world, Brandt said. The frigid waters contribute to a large and dynamic landscape, with many habitats to support salmon throughout their life cycle, he added.

Even so, Middle Fork Chinook are in a precipitous decline, with low abundance and low productivity in the past five years, Russ Thurow, research fisheries scientist at the Rocky Mountain Research Station, told the Statesman. Scientists estimate Chinook populations in the region are 3% of what they were in the 1950s and 1960s, and that even these populations may have been about 30% of what they were in the 1870s.