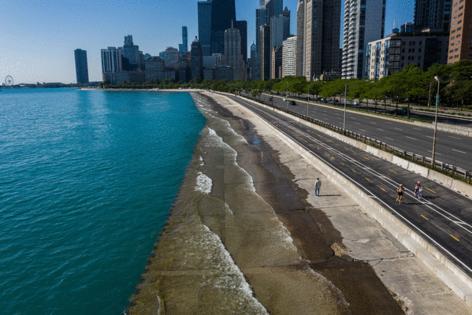 CHICAGO — The Great Lakes region is enjoying another year of lower water levels and wider beaches.

July water levels on Lake Michigan and Lake Huron are down more than 2 feet from 2020, a year of near historic highs when waves devoured cherished stretches of sandy coastline. With the exception of Lake Ontario, the other Great Lakes are falling as well.

And over the next six months, Lake Michigan water levels are expected to remain well below 2020 levels, according to Keith Kompoltowicz, the U.S. Army Corps of Engineers Detroit District Watershed hydrology section chief.

“There’s really no perfect water level,” said Kompoltowicz. “I can say that during the record highs that we recently experienced there was a ton of erosion and property damage and a lot of concerns about houses collapsing into the Lake.”

In 2020, Lake Michigan set a string of monthly records, hovering near the 1986 record high. Highs and lows have come and gone throughout the historical record, and climate change may bring increasing variability between the swings.

Water levels have dropped due to a decline in rain and snow.

In July, rainfall on Lake Michigan and Lake Huron was about 82% of the average, or a little less than normal, according to Lauren Fry, a physical scientist at NOAA Great Lakes Environmental Research Laboratory.

The 2020 high followed several years of very wet conditions — some of them record-setting — on the Great Lakes, according to Kompoltowicz. That year, 2020, was drier, allowing lake levels to fall in 2021, Kompoltowicz said.

“In 2022, we’re seeing more average conditions, and the lake level has responded in a manner we would typically expect: a nice, healthy seasonal rise in spring,” he said.