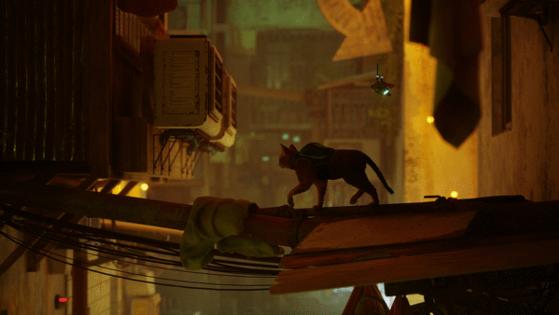 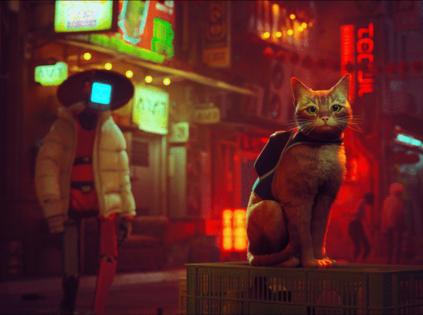 Cats are everywhere on the internet. They’re the subject of memes, card games and even have their own day. But in the world of video games, felines have been criminally underrepresented. Projects starring cats are few and far between, and those games haven’t really stood out — until now.

“Stray” has captured players’ hearts and emerged as the game of the summer. It’s a third-person — or perhaps I should say third-kitty — adventure game, where players take on the role of a nameless feline that’s separated from its friends after making a bad jump and falling into a mysterious underground facility called Walled City 99.

AN EPIC JOURNEY WITH HELP

The cat’s goal is to return to its friends, but it will have to venture through the dilapidated streets and apartment buildings of the seemingly deserted city. All that’s left are robots, which have sentience and act almost like people, and cute but voracious creatures called Zurks. It’s a bizarre situation that the cat has to navigate, but as players venture through the campaign’s 12 chapters, they’ll have help in the form of a drone named B-12.

With the spritely bot’s help, they’ll uncover the secrets of Walled City 99, and the fate of the people who once lived there. It’s a six-hour adventure, but the developers at BlueTwelve Studio pack so much care and style into the environment and storytelling that players won’t mind the short length.

“Stray” sucks players into its hypnotic cyberpunk world. The alleyways, railings and balconies in the enclosed city are a perfect feline playground. Players can use the cat’s preternatural balance and agility to prowl the maze of pipes or hopscotch across air conditioners jutting out of walls.

Traversal isn’t free and easy; instead, it’s built for a methodical approach that dovetails with the more cerebral gameplay. As the cat, players have to help the robots who have managed to build a semblance of society underground. They’ll uncover side quests such as finding sheet music for a guitarist or collecting flowers for a gardener. Those simple tasks reward the cat with badges that are displayed on the harness the cat wears.

These activities aren’t complicated or hugely rewarding, but it gives players an excuse to venture around the exquisitely detailed world. That in itself is an appealing part of “Stray.” The rich environment is conducive to letting players imagine life as a cat, turning the game into a cat simulator of sorts. Players’ natural curiosity will let them discover that doors and couches can be scratching posts. They’ll find rugs to paw at and nooks to nap in. They’ll even knock pots and other items off shelves, a devilishly fun activity in a video game but a huge annoyance in real life.