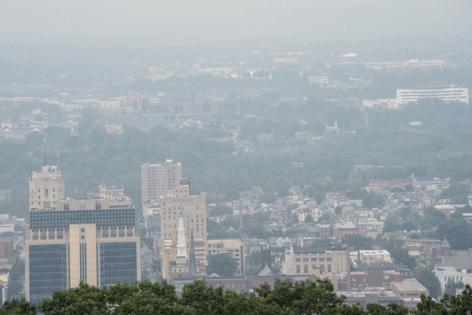 Wildfires could make their way into the keystone state and possibly into your backyard, climate, fire and forestry scientists say.

As wildfires become increasingly common across the western United States, Pennsylvania and its residents have so far remained insulated from the flames destroying communities worldwide.

But forest and climate experts say, that because of increasingly drier and hotter weather due to climate change over the next few decades, the chances of larger, more severe forest fires in the commonwealth will grow.

“The big picture is that by mid-century they think that the risk for large wildfires in sort of Western Pennsylvania down into West Virginia will probably about double,” Alan Taylor, a Penn State University professor of geography and ecology who studies fires, said.

The period in which large fires are likely to occur in parts of Pennsylvania and down the Appalachians is expected to about double by mid-century due to warming temperatures and longer dry spells, according to a National Oceanic and Atmospheric Administration report.

Pennsylvania has averaged about 600 wildfires per year that vary in amount and severity depending on the given year, officials said. Those fires tend to be on a smaller scale, burning about an acre each, and Mr. Taylor noted those wildfires result from the burning of forests’ understory, which are the small shrubs and trees between the forest canopy and floor.

The largest fire in recent memory was the 16-mile fire near Cresco, Monroe County, in 2016 that burned through more than 8,000 acres of forest and cost emergency services $2 million to extinguish.

Mr. Taylor said the size of the wildfires in Pennsylvania wouldn’t match the ferocity and danger of the millions of acres burning in the western U.S. because Pennsylvania’s wet climate prevents massive flame spread. But, he added that due to warming temperatures and human influence, the state could experience big fires in the future.

Climate extremes, which scientists say have become less predictable, could prompt the drought and extreme heat that dries up the state’s dense undergrowth and could serve as the fuel and kindling to a wildfire in the region.

“We are seeing and expecting more drying, drought and heat waves through our summers, and there’s a logical link between drought, drying, heat, flammability and therefore fire that can occur,” said Meg Krawchuk, a fire ecologist and an associate professor at Oregon State University.