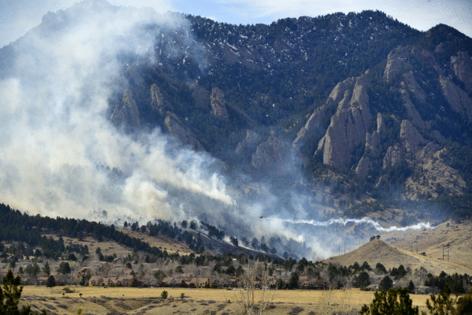 August is looking decent, too, but a potentially risky couple of months are soon approaching, Becky Bollinger of the Colorado Climate Center told The Denver Post.

“If we go into September and it’s just an extension of summer where it’s really hot, then we’re going to start looking at that risk again,” Bollinger said.

Several fires sparked last month in Boulder and Eagle counties, even prompting some evacuations, though firefighters quickly contained each of them.

An influx of rain across the drought-plagued state appears, so far, to have kept the wildfires at bay, Bollinger said. That moisture was especially welcome in southwest Colorado, which she repeatedly said was one of the regions most at risk of wildfires.

Typically just half an inch of rain falls on southwest Colorado each June. But this year two or even three times that much fell, Bollinger said. That added moisture to the state’s parched soils and foliage that, when dry, presents a huge risk for catching fire and spreading quickly.

That rain and moisture continued into July. Historically Bollinger said those months — June and July — present the highest risk for wildfires in Colorado. But that’s not necessarily still the case.

Not only have Colorado’s wildfires grown bigger and burned hotter in recent years, but experts now say the wildfire season lasts all year.

The rain that fell across Colorado in June and July should mean that wildfire risk in August is relatively low, Bollinger said.

Data collected by the U.S. Drought Monitor appears to support her assessment. As of Thursday, the agency downgraded the drought status for much of the state. The far southwest and northeast corners of Colorado, however, remain in “extreme drought” conditions.

Despite the rainfall, high temperatures have plagued Colorado over the summer and much of the rest of the country. If those higher-than-normal temperatures continue into the fall months and La Niña conditions persist, that could make for a hot and dry season again raising the wildfire risk, Bollinger said.

Currently, the National Interagency Fire Center predicts that most of Colorado is at “normal” risk for wildfires this month and next, though the northeast corner of the state sits at an “above normal” risk level.

“Our risk is really going to be based on when that moisture machine is going to shut off and how long of a period we have where conditions are dry and how warm we are,” Bollinger said.